Law students get a lesson in policing 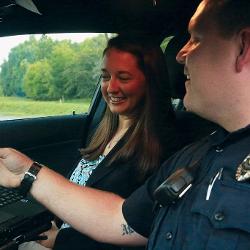 Thrill of the chase

When a white policeman shot and killed an unarmed black teenager in the small city of Ferguson, Mo., the incident made international headlines. In the months since, officer-involved shootings and the deaths of several officers in the line of duty have continued to make front page news, keeping police departments across America under intense public scrutiny.

University of South Carolina law professor Seth Stoughton understands that scrutiny better than most: He spent five years on uniformed patrol as an officer in Tallahassee, Fla. And although he speaks and writes about ways to improve modern policing, he also understands the many pressures that law enforcement officers face.

It has never been more important, he believes, to have future lawyers experience a “day-in-the-life” of officers; to better understand their mindset as they interact with suspects, and to consider the legal implications of those interactions.

That is why he requires his criminal procedure students to take a police ride-along.

“When I was an officer, I frequently had civilians accompany me for ride-alongs,” Stoughton says. “It gave me a chance to educate people about my job and, more personally, to make sure that they thought of me not just as an officer but as a person. I have my students go on ride-alongs because I also want to remind them that the legal rules and policies we learn about aren’t just abstract academic principles. They affect real people in meaningful ways every single day.

“It’s really important that students witness firsthand key concepts discussed in class, such as fourth, fifth and sixth amendment constitutional issues relating to arrest, search and seizure, and interrogation. Seeing officers make a few judgment calls about whether they can stop or arrest someone and then being able to immediately talk to them about their decisions can be eye-opening.”

Dillon McDougald, a third-year student, joined Sgt. Marion Boyce of the West Columbia Police Department on an afternoon shift. Although the experience was relatively quiet (a routine traffic stop and loitering incident), it gave McDougald a chance to talk with Boyce in depth about how patrols work, how police use the RAIDS database, body cameras, active shooter situations and the militarization of police.

“It’s one thing to develop an understanding of the law from reading cases,” McDougald says. “It’s an entirely different thing seeing it from the practical side, and this was a great opportunity to experience that.”

Chelsea Stewart, a third-year student, admits her heart started racing when a car stopped for a missing headlight was identified as stolen during her late-evening ride-along with Officer Shawn Ludwig of the West Columbia Police Department.

“I was anxious at first when the guns were drawn and officers were yelling for the suspects to get on the ground, especially with all of the news stories at the time about incidents involving officers. I had an adrenaline rush the entire time and even after I left that night,” she says.

The ride-along provided deeper insight into police procedure and showed her why the concepts she had spent all semester learning actually mattered. “Professor Stoughton thinks it’s important that we observe the fourth amendment in action, beginning with the arrest,” Stewart says. “I want to be a prosecutor, so this was really eye-opening and helped put the things we learned throughout the semester into perspective.”

Marlene Johnson-Moore, who graduated in May, says the highlight of her ride-along with Officer R.M. Henry of the Columbia Police Department was a call from a child who asked for help and then hung up. “The dispatcher called the number back and a parent answered the phone and says that everything was OK, but she could hear a child screaming in the background,” Johnson-Moore says. “Officer Henry told me that when a dispatcher receives a hang-up call and the address can be traced, an officer would still respond. It serves to protect people in domestic violence situations.”

Nothing suspicious was found in a search of the home. And although she says it is comforting to know that safeguards are in place to assist someone who might not be able speak freely to the dispatcher, Johnson-Moore ultimately questioned in her report whether the search was actually valid. However, since consent to search the home was freely given, she knew no violations had occurred.

“Having this class and this experience gave me a broader and deeper appreciation for the balance that must be struck between the competing interests of the government, society and the individual,” she says. “It also gave me a greater and renewed appreciation for the work that police officers do in our communities.”

“Ride-alongs are important because I want to give my students a realistic perspective on police actions,” says Stoughton. “Regardless of whether students have a prosecution-oriented mindset or a defense-oriented mindset, I want them to think critically about the role they play. Ride-alongs force them to confront some oftheir assumptions in ways that contribute to their growth both as lawyers and as people.”