Get to know the 2015 Homecoming Showcase winners 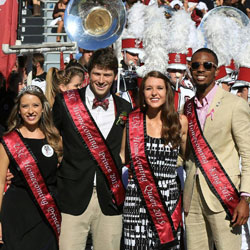 Each year, UofSC crowns four contestants in its Homecoming Showcase, but how much do you really know about the contenders besides what they present to you on stage? The 2015 winners decided to allow their fellow UofSC students to get to know them a little more through a Q&A.

What was your reaction when you heard your name called as a winner at showcase?
Bryson: I was speechless and wanted to cry. Growing up, I always wanted to be homecoming/prom king but never had the opportunity because I went to an all-male high school. I told my fraternity brothers two years ago that I was going to win homecoming king before I graduated and after my name was called, it was official.

Thompson: I cried. It is one of those moments that as many times as you go back and replay in your head, it doesn't seem real. Other than that, I don't remember much because I immediately felt overwhelmed with what was happening around me. Anyone who knows me can tell you how much I love to hear myself talk, but in that moment I was speechless.

What made you decide to participate in Showcase?
Vause: I saw Phi Mu's very own Leslie Knight win homecoming queen last year, and I thought to myself then how I believed I could compete as well. I love to be on stage, I love Phi Mu and I love Carolina! I knew it would be a fun experience.

Frishcosy: The opportunity to represent Bates House, since it has been such a tremendous part of my time at UofSC and to represent the university that I love! I would have regretted not at least participating, plus it seemed like an enjoyable process.

What was your favorite part of the homecoming court experience?
Vause: Definitely game day. Getting to go to the president's tailgate and being announced on the field was so exciting, and I will always look back fondly on that day.

Thompson: Other than the moment when I found out that I had won, the homecoming football game has been my favorite part of the experience so far. I had a great time at the president's tailgate with the other members of the homecoming court. I had never met President Pastides or his wife before, and it was awesome to get to meet previous homecoming queens of UofSC. It made me realize that this is something special that I get to have for the rest of my life.

Besides winning at Showcase, what has been one of your favorite moments while being a student at UofSC?
Bryson: One of my other favorite moments at UofSC is definitely winning last year's step show with my fraternity, Phi Beta Sigma Fraternity, Inc. We won for the second time in a row using a "Fresh Prince of Bel-Air" theme. I had the opportunity to perform as Will Smith during the show so I definitely had a good time. Be sure to check out the show on YouTube!

Thompson: One of my favorite South Carolina memories is the Georgia game last year. After a tough start to the season, there was a lot of talk about what the season would be like, but the Gamecocks pulled through and won. Even in the pouring rain, the student section was packed until the very end and everyone stayed to sing the alma mater that night with overflowing pride. It was a great day to be a student at UofSC.

What is something many people don't know about you?
Frishcosy: I guess not many people knew I like playing the harmonica, but more do now.

Thompson: I have been asked this question a lot recently, and I am beginning to run out of fun facts about myself, so I am going to repeat an answer from a previous interview. I love French things. I did a study abroad semester in Paris and ever since then I just cannot get enough. I have French décor all over my apartment, I look up French stories to read on the internet, and now, I even watch my favorite Netflix shows in French.

What are plans for after graduation?
Vause: I plan to go on staff with a campus ministry named Campus Outreach, where I will help college women grow in their relationship with God.

Bryson: After graduation, I will be attending graduate school to obtain my master's in higher education and student Affairs. I have had a career interest in Title IX, student conduct and student-athlete achievements, but ultimately I want to be a vice president of student affairs or a university president.

What have you learned about yourself since being a student here?
Thompson: The most important thing that I have learned in college is the importance of being yourself. This is something that we can read over and over again on cheesy motivational posters and Pinterest quotes, but when we really learn what it means it makes all the difference.

Vause: I have learned that it's not about me, and my purpose is to give back to others because of the grace I have received.

What is your favorite quote? How does apply to your experience at UofSC?
Frishchosy: "Put Good In. Get Good Out" — Minute Maid. This motto applies to a lot of collegiate aspects and to life in general; it's continuity! I believe if you put forth the time and effort to find the major, organization(s) and opportunities that interest and excite you, you will not only have an easier time being successful but you will also thoroughly enjoy your college experience.

Bryson: "Change will not come if we wait for some other person or some other time. We are the ones we've been waiting for. We are the change that we seek." — Barack Obama. This quote explains my experience at UofSC as I believe I have taken advantage of a lot of opportunities to initiate positive and intentional change. Often times, we have a vision for what we want to see happen on our campus and in our lives, but we wait for some other person to spark the conversation. I believe it is important to take risks and learn from your mistakes. It is OK to fail, as long as you fail forward onto your next platform to make a difference.

What's the best piece of advice you've gotten in college?
Vause: Commit to a few things during your time here, and go all in. Invest your time in areas that matter, and remember not to let trivial things take over your life. Fight to see the big picture of your life and make a difference.

Bryson: My mama always says, "protect your future." This is definitely relatable in a number of aspects, but to me, it is a reminder to intentionally operate in a way that safeguards what has already been ordained in my life. It is very easy to make irrational decisions without looking ahead. I have definitely become more aware and more conscious about the decisions I make in and outside of the classroom, as I want to always ensure I am presenting myself in the best way.

What would you like your legacy at UofSC to be?
Frishcosy: I would either like my legacy to be the freckled boy who always wore gym shorts to class or the person who was always smiling, had a positive perspective and sought out ways to get involve and helped those around him to do the same.

Bryson: I would like my legacy to be one who made a difference and inspired others to do the same. We cannot do anything alone, and I believe it is important to prepare future leaders and blaze trails for those coming behind me. I cannot wait to see what my mentees and other peers will accomplish after I graduate. I am confident they will do well.