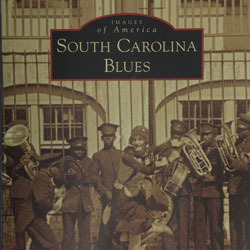 The book cover features a band from the Jenkins Orphanage (now the Jenkins Institute for Children) playing in 1926 in Charleston. Children there were often taught to play instruments as part of the program. "South Carolina Blues" author Clair DeLune knew she could get the image from several sources, but most were unresponsive or too expensive to pursue. With the help of the University Libraries’ Beth Bilderback and the staff of UofSC’s Moving Image Research Collections, DeLune was able to acquire a digital still for the cover. “That goes down as the hardest photo search in the history of Arcadia Publishing,” according to DeLune. “My editor said that!"

From the beginning of the slave trade in the South to a poster advertising Columbia’s 2013 Blues Festival, Clair DeLune’s new book, “South Carolina Blues,” covers a lot of ground.

A collection of about 200 photos, each with detailed captions, “South Carolina Blues” takes readers on an enlightening tour of the roots and evolution of the state’s rich blues music history.

“In my mind,” DeLune says, “we are honored in this country to have such a wonderful tradition as the blues. The people involved have such a rich, beautiful heritage, and I just think people often fail to see it because of the harsh times throughout the history of the blues.”

DeLune, an adjunct professor in USC’s School of Journalism and Mass Communications, is a longtime blues lover. She’s taught courses at USC on music history for more than two decades, hosted a blues radio show for the past 25 years on WUSC — the station’s longest-running show — and is a founding member of the Southern Roots Music Foundation.

“South Carolina Blues,” a full three years in the making, began with 20,000 photos spanning 400 years of history. Released Sept. 21, the book is the newest installment of Arcadia Publishing’s Images of America series, which uses archival photographs to present the history of distinctive communities and movements from across the country.

DeLune submitted about 500 photos, and Arcadia made the final selection. The process of finding, selecting, and whittling down images was sometimes difficult, but she considers the book to be a blessing.

“I’m trying to honor Nappy Brown and Drink Small and all the other wonderful people in the book, but I’m the one who truly benefits from having gotten to do this and to have been the one to make the leap and have the first real South Carolina blues history book,” she says.

While she stresses that the book is “a snapshot. It is by no means complete,” DeLune was able to gather photos from all time periods and from all over the state. She intentionally put a little more emphasis on the Midlands as there has already been discussion of subsequent volumes that focus more on the Upstate and Lowcountry.

The book begins by touching on the varied conditions of slavery and the traditions that slaves brought over from Africa. It was not an easy way to open a book focusing on a music genre, but the history and heritage of blues music and its performers are inextricably tied together.

“You don’t need to paint a picture that will scar readers for the rest of their lives, but you have to be honest,” DeLune explains.

Through the years, musical traditions were filtered down through call-and-response work songs, minstrels, ring shout worship or dance, choral groups, banjo players (the first of whom played gourd instruments or diddley bows — a metal strand nailed to a board and plucked while pressing down on a fretless board to change the sound) and, eventually, guitarists and the blues.

Musicians from the 20th century dominate a large section of the book, and rightfully so, as this was the period when the blues genre came into its own, and in turn heavily influenced rock and roll and rhythm and blues. Anyone who’s been to live shows or music festivals, particularly in the Midlands, in the past few decades will recognize some familiar faces.

While the book is focused on S.C. musicians, DeLune hopes people see that the book is not just “South Carolina-centric.”

“There’s stuff about other musicians in here,” she explains. And also, I have books about Mississippi blues in my South Carolina home, so I hope that people from everywhere will find that it’s a great book if you like history, if you like music, if you like South Carolina.”

You can pick up a copy of “South Carolina Blues,” and meet the author, today (Oct. 22), during the Frayed Knot and Spirit of Lake Murray Bluz Cruz in Chapin, S.C. The event runs from 5:30 p.m. until and will feature music from Freddie Vanderford, Piedmont Blues Harp and Rickey Godfrey. DeLune will also have a booth with several other Columbia authors in the Rockaway’s parking lot during the Rosewood Arts Festival, Sunday (Oct. 25), from 10 a.m. to 6 p.m.

The book is available locally at Uptown on Main, Mast General Store, the Cotton Mill Exchange at the South Carolina Museum and the Columbia Convention and Visitors Bureau. “South Carolina Blues” is also available online at Amazon or Arcadia Publishing.