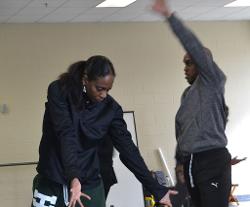 Artists find inspiration in just about everything — nature, politics, family, daily life. A vacation to the beach stirred the creation of “Ruptured Silence: Racist Symbolism and Signs,” a new dance production by University of South Carolina choreographers Tanya Wideman-Davis and Thaddeus Davis. The work investigates historic and contemporary perspectives of the Confederate flag and the Confederacy.

It was a trip to Myrtle Beach, S.C., during Bike Week that started it all, recalls Davis, who knew nothing about the weeklong motorcycle rally that attracts a predominantly white crowd that proudly displays Confederate flags. “Flags were hanging off the hotel balconies, motorcycles and trucks. They are on towels and bikinis. And in all the gift shops,” he says.

Troubled by the blatant exhibitionism of what he calls a “terrorist symbol,” Davis needed to vent. He wrote letters to likeminded friends and had long talks with his wife, Tanya Wideman-Davis. That started a dialogue, which encouraged the duo to channel their emotions through dance. As co-founders and co-artistic directors of Wideman/Davis Dance, the university’s resident professional dance company, the Davises are committed to revealing social and political issues using contemporary abstract choreography. They received a MAP Fund grant, which is supported by the Doris Duke Charitable Foundation and the Andrew W. Mellon Foundation and was the spark to create a new work.

They found further inspiration in the art of Carol Walker, the artist best known for exploring the raw intersection of race, gender and sexuality through her iconic silhouetted figures. The Davises used a Confederate flag with rear-screen projection to produce their own life-sized silhouettes and stop-motion animation, which resulted in a provocative lynching scene. They premiered their “shadow box” experiment this past spring at the McKissick Museum during a panel discussion held in conjunction with “Crafting Civil (War) Conversation,” an art exhibition commemorating the 150th anniversary of the ending of the Civil War. Attended by a cross-section of the community, including members of the Sons and Daughters of the Confederacy, this was the first time the Davises directly encountered views different from their own. They describe the event as a “heated conversation.”

Throughout the spring, the choreographers continued to test various concepts and premiered a workshop version of "Ruptured Silence" at 701Center for Contemporary Art here in Columbia. Then the murder of nine African-American church members in Charleston and the removal of the Confederate flag from the Statehouse grounds happened — events that altered the nature of work. “Until the Emanuel Nine, the dance was primarily a linear one-sided view of the flag,” says Davis. “After the tragedy, our approach changed. We now examine the duality behind the idea of heritage by incorporating the language used at the McKissick presentation, ideas from our students and dancers and the emotions we experienced from the murders in Charleston. We took our approach into totally new directions.”

The new direction can be seen in the “Square Dance” segment. Here, the company reimagines the traditional steps of “Cotton Eyed Joe,” a plantation dance and song that was performed throughout the region during the antebellum period. They’ve re-appropriated some of the basic steps into contemporary movements and juxtaposed them against the song’s original lyrics and a rendition of the tune sung by the legendary jazz vocalist Nina Simone. “We hope to address the duality of the flag and the Confederacy,” says Wideman-Davis, “including, the romantic and historical alongside the fantastical and contemporary.”

“This dance continues a hard honest conversation about race,” adds Davis. “The assassinations make this work all the more important, so we can figure out how people are thinking about one of the nation’s most troubling issues.”

"Ruptured Silence: Racist Symbolism and Signs" will be performed at 8 p.m., Tuesday-Friday, (Dec. 1-4) in Drayton Hall. Tickets are $18 for the general public; $16 for UofSC faculty and staff, senior citizens and military; and $12 for UofSC students. To purchase, call the Theatre and Dance box office at 803-777-2551 or stop by Longstreet Theatre between 12:30 and 5:30 p.m., Monday-Friday.