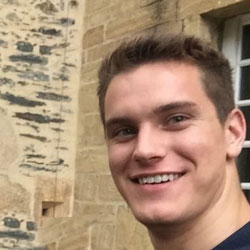 Business sophomore Drew Grubba is conversationally fluent in French, but he wasn’t familiar with all of France’s customs when he visited there this past summer.

In particular, his unfamiliarity with "faire la bise" — the practice of kissing a newly made acquaintance on both cheeks — led to one briefly awkward moment with a woman he met on the trip. That experience and other customs Grubba encountered while on study abroad in Taiwan convinced him of the need to be culturally prepared when traveling, studying or conducting business overseas.

He suggested to Alpha Kappa Psi, the professional business fraternity of which he’s a member, that other students could benefit from such preparation. The result is IBUS Culture, a business etiquette event that will take place from 6 to 8 p.m. Nov. 17 in Sonoco Pavilion at the Darla Moore School of Business.

“Essentially, we’re presenting this to inform students about important things they should know before going abroad,” he said. “You want to avoid anything that can go wrong and awkward situations.”

USC students from China, Hong Kong, Germany, France, Saudi Arabia, Chile, Brazil, Mexico and Taiwan will be on hand at IBUS Culture to demonstrate business and cultural etiquette that is common in each country.

More than 1,500 USC students participated in study abroad opportunities in 2014-15, and that number is expected to be even larger this year. Business majors accounted for more than 40 percent of the total number of students studying abroad last year.