Putting the 'ear' in gear 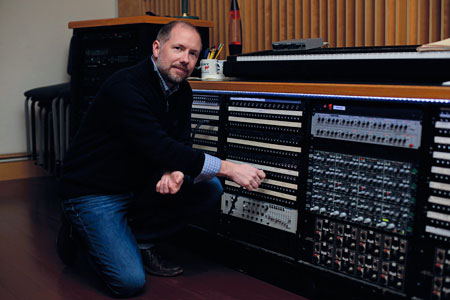 As the School of Music’s primary recording engineer for student and faculty performances and recitals, Jeff Francis brings decades of recording experience and a musician’s ear to the job.

Back in the 1990s, School of Music recording engineer Jeff Francis worked for Sony Classical Productions (now Sony Music) in New York City, where he recorded Grammy-nominated and Grammy-winning projects with the likes of Bobby McFerrin, John Williams and the Boston Pops, Wynton Marsalis and Yo-Yo Ma.

“We were on the leading edge of digital technology at the time,” Francis says. “We had one of the first 48-channel digital recorders.

It was three-quarters the size of a refrigerator, weighed 600 pounds — nearly 1,000 pounds with the case. We shipped it to concert halls all over the country to record orchestras, operas, chamber music groups and soloists.”

Now the School of Music’s primary recording engineer for student and faculty performances and recitals, Francis maintains and upgrades all the recording equipment and teaches digital recording and editing techniques. For all his technical expertise, though, he is a firm believer in not letting the equipment get in the way.

“In the industry we call it Gear Acquisition Syndrome,” he says. “It’s the idea that the newest microphone, plug-in, software or analog compressor will make a better recording. My job is to show students the techniques to best use the tools they have and then show them how to get those tools out of the way of just making music.”

Of course, his job is also to make them sound good, which is how Francis came to play such a critical role in the design of Johnson Hall, the new lecture/performance space in the Darla Moore School of Business. As a classroom, the hall needed to be user friendly so professors could operate the audio and video equipment without assistance.

When used as a performance space, however, the same hall had to fit the needs of sound and light technicians.

“We spent a lot of time negotiating the two needs of the hall,” says Francis. “In effect, the space flips and all technologies built into the system are utilized.”

In the end, it comes down to having the right gear but also having a good ear, something Francis developed while earning his undergraduate degree in music engineering technology at the University of Miami. It doesn’t hurt that he also plays the bass.

“It definitely helps,” Francis says. “Being a musician provides insight into how the music is constructed and makes it easier to communicate with the players.”