Climate of fear: stranger danger and the media

In the summer of 2002, Ed and Lois Smart experienced every parent’s worst nightmare: Their 14-year-old daughter, Elizabeth, was taken from their home, while the family was present, by a man who had done work for them. She was white. Her family was wealthy and well educated. Elizabeth made national news and was found nine months later. 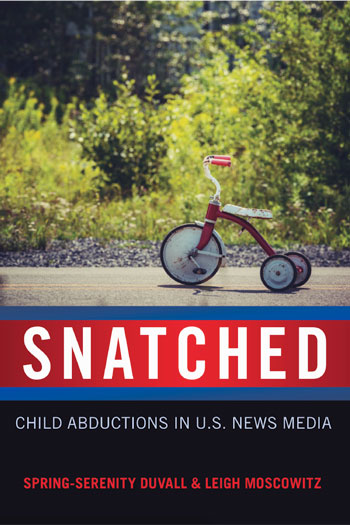 That same year, Alexis Patterson went missing in central Milwaukee. Local media reports mentioned that her stepfather, who said he walked the 7-year-old to school that morning, had a criminal record, but police ruled him out as a suspect. Alexis was black. Her family was poor. She never made national news, even after it was pointed out that her case was being treated differently. Alexis is still listed as missing today.

“When kids of color go missing, there is no national attention,” says Leigh Moscowitz, an associate professor in the School of Journalism and Mass Communications and co-author of the new book “Snatched” (with Salem College assistant professor of communications Spring-Serenity Duvall). “These types of crimes are considered ‘normal’ for low-income areas.”

But the impact of those editorial decisions can be significant. “Kids that get more coverage are more likely to be found,” Moscowitz says — and the cases that dominate the media tend to involve young, white, telegenic children, mostly girls, who went missing from upper-middle class families.

Moscowitz didn’t start out to write a book about child abductions. In the summer of 2002, she was a grad student at Indiana University, working on her dissertation about media coverage of same-sex marriage court cases. But as the national media went crazy for the Elizabeth Smart case, other cases started popping up, too: Samantha Runnion, 5, in California; Shawn Hornbeck, 11, in Missouri and others.

Were children — the very symbol of innocence — increasingly being targeted? What was the media’s role? Was this what she should be researching instead?

As it turns out, while media coverage was at an all-time high, childhood abductions were at an all-time low. “There was a disconnect there,” Moscowitz says. “That was how the project began: Why do some abductions become national stories?”

In fact, the roots of today’s missing child obsession go back to the 1970s and a handful of young boys, Etan Patz, Steven Stayner and Adam Walsh, whose father became an outspoken advocate for child safety and later for helping police catch criminals on TV’s “America’s Most Wanted.”

“News narratives become symbolic,” Moscowitz says. “They reflect social fears. The news tells us more about the fears of the time than what is actually going on.”

In the 1920s, for example, fears concerned abductions for ransom, frequently related to organized crime. But by the 1970s, says Moscowitz, the fear of losing one’s child reflected changing societal norms, as divorce became more prevalent and judges decided where children should live. Today, a child in the U.S. is much more likely to be taken by a parent or guardian than by a stranger. Each year, fewer than 100 children in the U.S. are taken by someone the family does not know, while more than 300,000 are taken by a parent or other guardian.

Even when coverage contributes to a child’s rescue, the media’s approach to the case can give a false impression about the nature of the crime, according to Moscowitz — particularly when one of the first questions asked by reporters is, “Why didn’t they try to run away?”

As an example, Moscowitz cites the case of 7-year-old Erica Pratt, who was abducted by a stranger seeking a ransom in 2002, the same year as the Smart case. Erica, a rare example of a child of color who did make national news, was named Time magazine’s person of the week after she affected her own escape by chewing through the duct tape that bound her hands and kicking out a window.

News narratives become symbolic. They reflect social fears. The news tells us more about the fears of the time than what is actually going on.

The media celebrated Erica’s bravery, but as a consequence may have contributed to a dangerous misreading by the public that other children, those who did not manage to escape, may be partly to blame for their abduction and captivity.

“That’s not the thing we were looking for,” Moscowitz says. “It’s the thing that just hit us in the face.”

The news media’s treatment of Shawn Hornbeck is particularly illustrative. Just 11 years old when he was abducted, tortured and then sexually assaulted for four years, Shawn was rescued after his abductor, Michael Devlin, abducted another boy and eyewitness accounts led police to him. After his rescue, it was revealed that Shawn had interacted with Devlin’s neighbors, and even police officers, without revealing his identity – a fact seized on by television news pundits.

“I actually hope I’m wrong about Shawn Hornbeck,” said Fox News host Bill O’Reilly in 2007. “I hope he did not make a conscious decision to accept his captivity because Devlin made things easy for him. No school, play all day long.”

“Shawn Hornbeck spent four years with his alleged abductor and appeared to have had many chances to escape,” ABC News reported around the same time. “So many people are asking why didn’t he make a run for it.”

“Without that image of innocence,” Moscowitz explains, “these kids are treated very differently.”

Ultimately the fear of “stranger danger” is very real, even if the actual danger is overstated. In fact, during her research, Moscowitz found herself hugging her own young children a little more tightly.

“Some of this is really horrific content to deal with on a daily basis,” she says. “There is a creep factor there.”

But, she had to remind herself that the likelihood of something like that happening is extremely rare.

“These are very real tragedies,” she says. “It’s every parent’s worst nightmare. But you have to strike the balance between the real tragedy and common sense, letting kids be kids.”

Check out “Snatched: Child Abductions in the U.S. News Media” by Spring-Serenity Duvall and Leigh Moscowitz