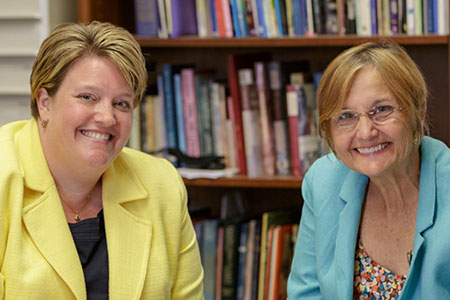 Medical treatment has come a long way with cancer. Considered a death sentence just 50 years ago, a cancer diagnosis currently, more often than not, causes an arduous medical detour in life that leads to remission.

“We now cure somewhere between 70 and 85 percent of all cancers,” says College of Nursing professor Sue Heiney. “There should be about 11 million survivors in the U.S. walking around now, and probably 15 million by 2020.”

That’s great news, but survival comes with costs. Patients must endure often-grueling treatments that may well cause other health problems. They must learn about the potential for and signs of recurrence.

Cancer is now best viewed as a chronic disease, one that creates a new normal for a person and his or her family. The College of Nursing’s Cancer Survivorship Center is a research group dedicated to identifying ways to enhance the well-being and long-range prognosis of these survivors, whether they are still in treatment or have been declared cancer-free.

Since joining Carolina in 2008 after nearly 30 years in oncology at Palmetto Health, co-director Heiney has helped recruit faculty members with a range of cancer expertise to the College of Nursing. The original focus was breast cancer, but as more faculty came on board, the group’s research vision has broadened considerably.

We now cure somewhere between 70 and 85 percent of all cancers.

Epidemiologist Swann Arp Adams, a colleague of Heiney’s when both were at Palmetto Health, was an early addition to the research group in 2009 and now serves as co-director. “As we’ve grown, it’s become much broader in definition,” she says. “Because prevention and diagnosis are so intimately tied to survivorship, I would say we really cover the cancer continuum.”

Heiney and Arp Adams recognize the responsibility of a state institution in serving its residents, so the Cancer Survivorship Center works to keep a sharp focus on South Carolina’s needs. Those include health disparities such as the lower survivorship for African-American and rural residents. And the team looks beyond the course of treatment that doctors provide.

“It can improve their quality of life, decrease barriers to care and increase their understanding of their illness, all of which increases their ability and motivation to follow through on cancer treatments. “

Cancer still disproportionately strikes and kills in South Carolina, but the Cancer Survivorship Center is already seeing progress in it mission — progress that the team is intent on accelerating.

“In the end, that’s really where my heart is, and where I want to see us — that we’re making a difference.”