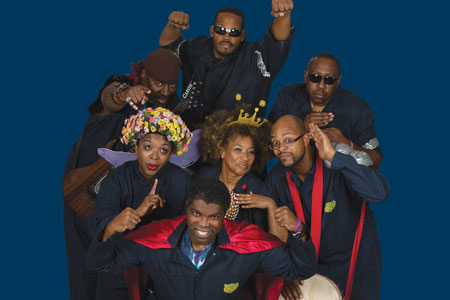 Darion McCloud and his band of do-gooders are using storytelling and music to combat illiteracy in South Carolina.

Somewhere in the city, a courageous band of supercharged do-gooders is on a mission: to promote storytelling and put an end to its arch nemesis, illiteracy. Armed with the powers of music, art, acting and, most importantly, imagination, Guitar Warrior, Queen Bee, Mr. One, Mother Nature, Mr. Two, The Other One and their fearless leader, The Captain, blend classic nursery rhymes, poetry and children’s stories with old-school rhythm and blues, funk, hip-hop and jazz in an effort to drive down South Carolina’s high illiteracy rate.

Story Squad is the brainchild of Columbia-based actor, director, storyteller, educator and arts advocate Darion McCloud (’88), aka the Captain. “If Parliament Funkadelic had a baby with ‘Sesame Street’ and raised the baby on Marvel Comics and ‘Reading Rainbow,’ the result would be Story Squad,” he says.

For years, McCloud has been one of the Midlands’ best storytellers, having practiced the art form as a staff member of the Richland County Public Library for more than a decade. He’s also an established member of the local theater community, having honed his acting and directing skills since the late 1990s. In 2012, however, the born entrepreneur decided to strike out on his own, printing business cards and handing them out to everyone he knew. He updated his artist profiles and asked his friends to spread the word that he was open for business.

The oldest of five children, McCloud was born and raised in Columbia and attended C.A. Johnson High School, where he played defensive back on a not-too-great football team. His mother was a nurse’s assistant, his father a laborer. “Today, we’d call him a landscaper,” McCloud says, “but to tell the truth, he maintained the lawns for a local rental company that catered to low-income families.”

To make ends meet, Mom did hair and Dad did handyman work. In the summers, Darion worked alongside his father and witnessed more than a few rental evictions. “I grew up with people who were hardworking, kind and thoughtful,” he says, “but they wound up with far less than we had because they couldn’t get the breaks they needed to improve their situations.”

McCloud was more fortunate, getting his own big break when he was encouraged to go to college by Zeke Williams, a family friend. “I didn’t know anything about getting into college,” McCloud says. “Zeke said, ‘You’re going to school!’ and scooped me up and found a place for me.”

It’s hard carving out a living in the arts, especially in a city like Columbia. But Darion seems to be making a go of it.

He spent his first year at Fort Valley State University, a historically black institution located in south Georgia, where he was a member of the football team. Disillusioned by the isolation and the lack of a studio art program, he transferred to Carolina. In 1984, he earned a walk-on spot on the Carolina football team but quit right before the first game. That season the Gamecocks finished 10-2, were nationally ranked and were the best team in Carolina football history before the Spurrier era. “That wasn’t a smart move,” he recalls. “I quit the Black Magic team! Can you believe that?”

But what he lost on the gridiron he made up for in the classroom, piecing together a college education by taking as many classes as he could afford at a time.

“Some semesters I would take one or two classes and work more,” he says. “Other semesters I would take more classes and work less.” He rode the bus, then bought a cheap bicycle. He slept on couches and moved back home several times to save money. A studio art major, he avoided classes like photography and oil painting that required lots of supplies. “I just couldn’t buy that stuff. I was very methodical in my course selections.”

It wasn’t easy, but he finished, earning his college degree.

Considering how important education has been in his own life, it’s easy to see why McCloud now devotes so much time and talent to the enrichment of children’s lives through storytelling. Unfortunately, it’s also easy to see why the work he does is so important in a state like South Carolina.

A U.S. Department of Health and Human Services 2011-12 study ranked the Palmetto State near the bottom for children ages 1-5 who are read to by family members at least three days per week. The partnerships Story Squad has built with area libraries is part of an effort to change that, in part by getting young readers into spaces where they will be surrounded by books. That will help them associate reading with movement and active learning, according to Michelle Martin, a researcher in childhood literacy and the Augusta Baker Chair of Childhood Literature and Literacy in the university’s School of Library and Information Science.

Being an all-African-American ensemble leads to other positive outcomes. “Being all black artists we send a message that many children aren’t getting,” says Bonita Peeples, aka Mother Nature. “We present a positive and uplifting portrayal of black music and storytelling that go back to our West African roots.”

But the ensemble’s work isn’t geared exclusively toward African-American audiences. In fact, as McCloud ponders the 2015 Emanuel African Methodist Episcopal Church shootings in Charleston, he thinks aloud about how storytelling can help bridge cultures.

“How would Dylann Roof’s life been different if he had seen a multi-ethnic casting of ‘Br'er Rabbit’ when he was 6?” he posits. “Or what about an all African-American casting of the ‘Glass Menagerie’ when he was in high school? Or if he had real exposure to writers like James Baldwin or Maya Angelou or Toni Morrison? Who knows how his life would be different. You just don’t know.”

When not performing, Story Squad can be found in their secret headquarters rehearsing for their next show. A mixture of “let’s try this,” “why not do that?” and “maybe we should do this again,” the typical Story Squad rehearsal could serve as a metaphor for McCloud’s own career trajectory — beginning with his former job in the children’s room at the Richland County Public Library.

Before he discovered the stage, McCloud spent 13 years helping kids discover books, encouraging parents to read to their children and learning to weave stories. “Somehow, I became the unofficial storyteller, I guess because I was there for so long,” he says. “I was lucky that people dug me.”

One day, though, a parent asked where he acted and McCloud responded that he wasn’t an actor. “She said, ‘Yes you are,’ ” he recalls. “‘You just don’t know it.’” That woman passed his name on to Jim and Kay Thigpen, the founders of Trustus Theatre, Columbia’s only professional theater company. He first took to the stage in a 1997 Trustus production of “The Salvation of Iggy Scrooge,” an irreverent take on Dickens.

“Darion was a storyteller and an artist,” says Kay Thigpen. “As far as I’m concerned, a storyteller is an actor. The talent was already there. All it took was Jim to bring it out.”

McCloud performed in productions of Amiri Baraka’s “Dutchman” and then hit his stride under Jim Thigpen’s direction in Mart Crowley’s “Boys in the Band.” Other roles followed, among them Walter Lee in “A Raisin in the Sun,” Leevee in “Ma Rainy’s Black Bottom” and Lincoln in “Topdog/Underdog.”

While refining his acting and making a name for himself in the local theater scene, McCloud also began to explore directing and eventually formed The NiA Company, a small traveling theatre ensemble that performs in churches, community centers and other nontraditional spaces. NiA, which derives its name from the Swahili word for “purpose,” uses nontraditional performers and targets at-risk youth and economically challenged audiences.

Darion says, “Reach for the sky”

A dozen women gather in a circle. You can see the apprehension on their faces — for a few of them, this professional development workshop is a bit more than interactive than they expected — but McCloud uses a quick game of Simon Says as an icebreaker. “We’re all friends here, get a bit closer,” he says before starting the game. “Simon says, ‘Reach for the sky.’ Simon says, ‘Put your hands down.’ Simon says, ‘Reach for the sky.’ Put your hands down.”

Several participants grin at their mistakes. McCloud grins, too, for he’s still getting used to this latest role himself — as a motivational speaker. “I used to hate that term,” he says. “But like anyone in business, you have to keep moving forward, finding new ways to extend your reach and enhance revenue.”

Today’s workshop is for Save the Children, a group of early childhood educators and reading specialists from several rural South Carolina counties, and McCloud’s theater games are designed to help them develop communications and interpersonal relations skills. At the end of the two-hour session, the group is ready to face the challenges of working with families in need.

“I’ve seen Darion a few times,” says LaKisha Dewitt, a program specialist for Save the Children. “I’ve seen him hold the attention of 3- and 4-year-olds and their parents. I’ve seen him get families so excited that I knew he would be perfect for us. This is was exactly what we needed. I knew he could energize us and get us focused.”

McCloud now hires as many as 20 people a year for various storytelling and acting gigs, but he admits he had no plan when he ventured out on his own. And while he’s got the artistic aspects of his job down pat, like any entrepreneur, he continues to face challenges as he builds his business.

“As the sole proprietor of Story Squad, the taxes are just killing me,” he says. “I’m working with the Small Business Administration to help restructure Story Squad and some of the other things I’m doing.”

Not one to let the Internal Revenue Service ruin a good thing, McCloud is hopeful about the future of Story Squad and dreams of an even bigger ensemble. He’d like to add a bassist, violinist and perhaps a tuba player. “Musically it would add more depth and variety to our sound,” he says.

McCloud knows from past successes — as well as past failures — that his career will need constant tweaking and adjusting. Sometimes, he has to improvise. Other times, he has to transform himself for a new role. He is a work in progress, which is exactly how it should be.

“It’s hard carving out a living in the arts, especially in a city like Columbia,” Jim Thigpen explains. “But Darion seems to be making a go of it.”

This story originally appeared in the Winter 2016 issue of Carolinian magazine. Visit the My Carolina Alumni Association website to become a member and receive Carolinian three times a year.