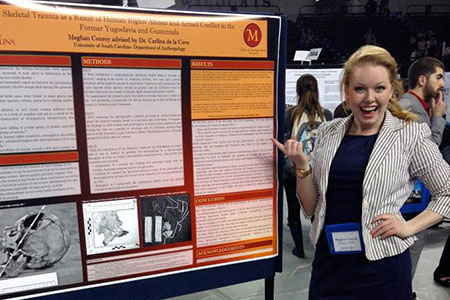 Meghan Conroy got started early with research at Carolina and earned grant funding from the university to present her results at national conferences held in Kentucky (pictured above) and Utah. She now works in global terrorism analysis for the Jamestown Foundation in Washington, D.C.

Big-time college football helped lure Meghan Conroy to the University of South Carolina, and the 2014 graduate used her time here to prepare for a career in a field that is just as much in the public mind, though in a much different arena. Her academic success at Carolina opened the door to counter-terrorism research, where she’s already made a mark as a postgraduate.

Cultivating an interest in terrorism that was planted when she was an undergraduate, Conroy pursued graduate work at central England’s University of Nottingham in the Centre for Conflict, Security and Terrorism. Her master’s thesis won the dissertation prize last year, and it offers insights into one of the most intractable foreign policy problems of our time: how to successfully confront ISIS, the terrorist group that has taken control of significant portions of Iraq and Syria. For her master’s work, she wanted to test the hypothesis that the terrorist group had essentially evolved resilience against targeted attacks through changes in organizational structure.

She started with publicly available data about more than 100 individuals involved in terrorism who eventually became part of ISIS. Using those data to determine whether each pair of individuals had any connection, she was able to generate a map of ISIS’s social network.

By analyzing that map and how it had changed over time, Conroy found a very clear indication that ISIS had changed — in a way that has made the United States’ primary strategy against it less effective.

“I started with statistical information for a group that ISIS kind of morphed out of in the early 2000s,” Conroy says. “It was called al-Tawhid wal-Jihad, and it was led by a man named Abu Musab al-Zarqawi.

“He was just unbelievably brutal, and he has served as an inspiration for so many terrorist organizations. He actually is quoted at the beginning of every single issue of ISIS’s magazine, even though he has been dead since 2006.” 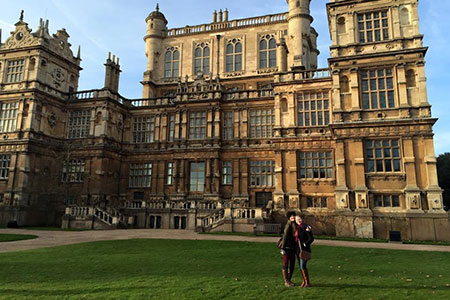 Success at Carolina led to postgraduate work at Nottingham University. Conroy is pictured here with a fellow master's student in front of Nottingham's Wollaton Hall, which served as Bruce Wayne's mansion in "The Dark Knight Rises.

“He was at the center, and all of the networks were stemming from him,” she says. “They weren’t very connected with one another, all of these sub-networks.”

“The way ISIS is essentially structured now is so that if someone dies, it isn’t a big deal. They can be replaced,” Conroy says. “The group has undergone, quite honestly, very impressive organizational learning. ISIS has been very skillfully adaptive and it has organized itself to be resistant to targeted attacks that aim to take out its leadership.”

That has important consequences in the international effort to bring about the terrorist group’s demise, Conroy says. Although drone strikes might have been effective against the early-2000s progenitors of ISIS, the evolution away from al-Zarqawi’s hub-and-spoke organization of the leadership has made the group more resilient in the face of this approach.

“A lot of times when they announce that some of these big names in ISIS have been killed, obviously people are excited, but it’s really more of a moral victory at this point,” Conroy says. “The vast majority of the time it’s nothing more than a really good news headline that help people feel like we’re winning the war on terror. But in reality, someone is already taking the other individual’s place in the network.”

Meghan Conroy’s postgraduate work followed an undergraduate career filled with research experience. She got started with mentor Deborah Billings in the Department of Health Promotion, Education and Behavior by studying female genital mutilation and culturally relative approaches to combating it. She moved on to research political violence with the Department of Political Science, which carried into a project with mentor Carlina de la Cova in the Department of Anthropology on skeletal trauma from two different genocides, in Guatemala and the former Yugoslavia.

She was supported each step of the way by grants from the Office of Undergraduate Research's Magellan programs, which have provided over $3 million in funding to more than 1,000 undergraduates in the past 10 years. The grants cover not just the cost of research materials, but travel to conduct the work and present the results at conferences as well.

Conroy enjoyed research so much that she served as a Magellan Ambassador for the university, helping educate undergraduates about the research opportunities available at Carolina.

“My time as a Magellan Ambassador was without a doubt the best outside-the-classroom experience I had at USC, with the exception of football games, of course,” Conroy says. “I remember being so envious of my friends who had found their niches through Greek life, athletics, or church groups — it took a bit longer for me to find where I fit in at Carolina. Research gave me a sense of purpose, and being a Magellan Ambassador allowed me to share that with other students. The experience honed my leadership and public speaking skills, provided me with a nice dose of maturity and personal responsibility, and helped me develop the ability to relate to students with myriad interests, backgrounds and goals.”