'I’m always a social worker, even when I’m a writer' 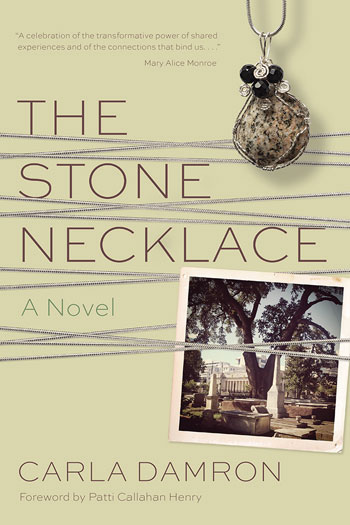 Carla Damron's novel "The Stone Necklace" has been chosen to be the 2016 One Book, One Community read for the city of Columbia.

Carla Damron writes what she knows. With more than 30 years of experience in social work, this University of South Carolina alumna’s novels center on characters in the midst of crises — whether they are dealing with grief, mental illness or a mixture of both.

Damron’s most recent novel “The Stone Necklace,” was chosen by the Richland Library as 2016’s One Book, One Community read for Columbia. The annual event in February encourages Midlands-area residents to read the same book at the same time, and to share their passion for reading with friends and neighbors. The State newspaper is publishing a chapter a day on its website through the end of February.

“The Stone Necklace,” which follows characters threaded together by a fatal car crash, is published by Story River Books, Pat Conroy’s original fiction imprint with USC Press. At 5:30 p.m., Tuesday ( Feb. 9), Damron and three fellow Story River Books authors will be at the Hollings Library for a panel discussion and book signing. The event, presented by University Libraries and USC Press, is free and open to the public.

“It seems I’m always a social worker, even when I’m a writer,” Damron said. “In this project, I wanted to explore the process of recovery. Each of my characters is on a journey of some kind. Lena’s marriage recovers from her affair, but now she must overcome grief to move on with her life. Sandy faces a tremendous struggle in her recovery from addiction. Becca’s dealing with her eating disorder issues, with grief, and with simply being a teenager. For each, recovery is not a linear process, but a winding one.”

The novel is set in Columbia. “Columbia is my home now and has been for over 30 years. I love this city. It’s complex and lovely and troubling at times, but it is home,” Damron said. “I hope the novel gives readers a glimpse of the city I see — from the wealthy neighborhoods to the places where folks struggling with homelessness stay.”

Damron hopes that her readers will gain insight into those who struggle with mental illness, whether it’s homelessness or an eating disorder.

“Recovery can happen. It takes work, and it’s important to have support around you,” said Damron. “Support can come from the most unlikely places — what matters is that we are open to it, that we allow ourselves the chance to grow and change.”

Born and raised in Sumter, South Carolina, Damron earned her bachelor’s degree in psychology from Wake Forest, and then worked for a mental health clinic in Camden, South Carolina. There she was strongly encouraged by a co-worker to study social work at Carolina. Damron started as a part-time student in 1982, in a program so small that she says most of her classes were in the same classroom. Her professors continue to be mentors now, particularly Frank Raymond, former dean of the College of Social Work.

She earned a master’s in social work and continues to be involved at Carolina, acting as a field instructor for students and she spoke at the social work hooding ceremony in May 2015.

Damron’s ties to Carolina don’t stop there. Her husband Jim Hussey is celebrating his 28th year at the university, where he has been the chair for the department of epidemiology and biostatistics at the Arnold School of Public Health for three years. Damron and her husband are avid Gamecock basketball fans.

Damron’s previous publications include “Keeping Silent,” “Spider Blue” and “Death in Zooville,” a mystery series that follows Caleb Knowles, a therapist and social worker who’s determined to clear the name of his brother. She has had several short stories published including “Lady Blue,” “Convergence” and “Outer Banks.”