Alumnus was face of the flood for SC 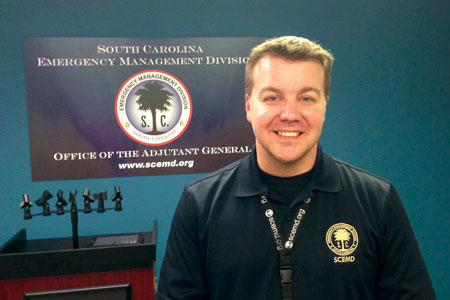 Derrec Becker is spokesman for the state Emergency Management Division and a 2003 graduate of the UofSC School of Journalism and Mass Communications.

If Derrec Becker looks familiar, perhaps it’s because you saw a lot of him during news coverage of the flooding that inundated the Palmetto State in October.

As public information coordinator at the S.C. Emergency Management Division, Becker was in front of TV news cameras day after day, providing updates after Columbia-area dams burst and roadways became rivers. It was a familiar pose for Becker, who began his career in TV news after earning a degree in broadcast journalism from the University of South Carolina in 2003.

“As a reporter, I had interviewed personnel at the Emergency Management Division in 2004 when a hurricane hit South Carolina and was familiar with what they did,” he says. “I first got into communications to be a conduit for information so that people could make decisions based on an objective perspective. I still love news and I’m still doing it — it’s just that my lens is flipped.”

Life as a spokesman for the Emergency Management Division can be like that of a firefighter, Becker says — long periods of training and preparation interspersed with intense bursts of all-hands-on-deck activity.

“South Carolina is vulnerable to every type of natural disaster except volcanoes,” he says. “Historically, we’ve had earthquakes and wildfires, and there’s flooding every year in parts of the state.”

The October flooding inflicted the costliest damage on the state since Hurricane Hugo in 1989, and Becker sees it as his role to help South Carolinians understand the risks they face.

“When it comes to personal safety, a severe thunderstorm can be as deadly as a hurricane,” he says. “The main thing is being responsive to weather warnings. Paying attention can save your life.”

This story originally appeared in the February issue of USC Times. Check your campus mailbox for the latest issue.