Anonymous donor is a familiar face to scholarship recipients 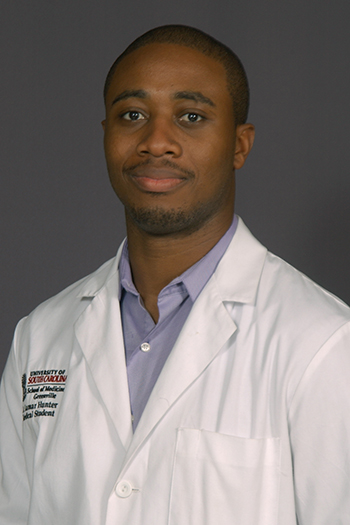 A. Lamar Hunter is in his third year at the Greenville School of Medicine.

When it came time to decide where to spend four years in medical school, Charleston native A. Lamar Hunter had a difficult choice.

“I was really torn between Greenville and Charleston,” says Hunter. “I love Greenville, and I love Charleston, and it was the scholarship that put me over the top.”

The scholarship to attend USC’s School of Medicine in Greenville was provided by a generous benefactor who prefers to remain anonymous — to the larger public, anyway. He has been more than happy to get to know the scholarship winners whose lives he has impacted.

“He told me, ‘Listen, I know you have issues paying for school, and we want to help.’ And the scholarship has done that for me,” Hunter says. “It’s really like someone deciding to take a chance on me.”

Hunter has made the most of that opportunity, and is now a third-year medical student interested in a career in obstetrics. He says he really missed the day-to-day work at the end of his OB-GYN rotation, during which he delivered several babies. “I still remember that first girl’s name,” he says.

The donor has established scholarship funds at both the Greenville School of Medicine and Columbia’s law school. A USC law alumnus, he knows the two professions need to attract the best.

“With doctors you’re talking about health, and with lawyers you might be talking about your freedom,” he says. “Both of those jobs need really good people.”

The scholarship recipients he has been able to support at Carolina, he says, definitely fit that bill.

“They’re all bright-eyed, energetic, and optimistic,” he says. “What a way to start life!”