Khadija Kakar and her brothers and sisters grew up in Balochistan, Pakistan, an impoverished province where women are often discouraged from attending college — not only by society but sometimes by friends and family. Kakar’s mother was a widow, which made the hardships even more challenging.

Nevertheless, she supported the family, spared no effort to ensure all of her children went to school, and pushed Pakistani cultural pressures by encouraging her daughters to get an education so they could have more opportunities for a better life.

With her mother as inspiration, Kakar overcame cultural adversity in her native Pakistan and today is a Fulbright Scholar and third-year Ph.D. student studying biomedical science at the University of South Carolina School of Medicine Columbia.

“I saw her, throughout her entire life, as a widowed woman, despite the conditions, push for our education, have quality of life, look for our better future,” Kakar says. “I used to think that if a single, widowed and unemployed woman can bring such change and can raise children then, definitely, a woman who is educated and is employed can make even bigger change.”

Kakar’s encounter with a frightened young boy brought more validity to the ugly truth about living in poverty in a province that faced lack of education, lack of resources, drug addiction and economic collapse.

“It was dark night with heavy rain, and there was a small kid of about 6 or 7 years old banging on our door and asking for help,” Kakar says.

My path toward education was an improbable act. My mother pushed for my education against all odds and strong cultural pressures.

The boy said his mom was suffering because they didn’t have money to pay for her painkiller. After learning about the hardships the woman and her son were facing, Kakar paid the woman’s medical bills. That act of kindness was not a one-time thing.

“I decided since then that I will get the best education and, as soon as I’m employed, I’ll start helping those people who are underprivileged and who don’t have any education.”

Studies show that Balochistan is Pakistan's poorest province. Although the prime minister announced a $1.5 billion subsidy program last November to mitigate hardships, Balochistan, which accounts for nearly half of Pakistan's territory, has low representation among  social protection programs.

For eight years now, Kakar has been helping people in Pakistan. Using leave-with-pay money from her job in Balochistan, she’s aided girls who were interested in studying but could not afford it, providing tuition, books and transportation to and from school for them.  When a promotion increased her income, Kakar gave money to other families in need.  Nine students and four families – ranging in age from around 6 to 70 – are currently benefiting from her generosity. Kakar’s sister joined her efforts four years ago, and their family in Pakistan helps them identify individuals or families that need assistance. 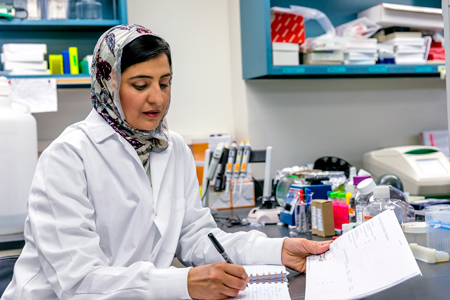 Khadija Kakar spends much of her time in the lab at the School of Medicine Columbia doing research as she studies biomedical science.

Now, Kakar is setting her sights on creating an organization to offer the same kind of aid on a larger scale and is hoping to use knowledge and connections she gained at a Fulbright awards ceremony in March. She was the only UofSC Fulbright scholar selected to attend the ceremony in Washington D.C., at which U2 Lead Singer Bono was awarded the Fulbright Prize for International Understanding for his commitment to fighting injustice, extreme poverty and the global AIDS crisis. The hotel ballroom full of people dedicated to successful charitable work offered a way for Kakar to learn how she can create an organization to provide resources for her cause. In addition to formation examples and advice from fellow advocates, she also made some recruitments.

“I met a lady from Balochistan who is living in Washington, D.C., and working in public health sector. She is interested to be part of my organization,” Kakar says. “One of my friends from Virginia Tech also showed her interest. I hope we all together will take an initiative for this cause soon.”

Kakar was accepted into the Fulbright Program and came to the United States in 2019.  The international education program provides exchanges between the U.S. and more than 160 countries and focuses on promoting mutual understanding through academic and bicultural exchange. South Carolina was deemed the best fit for Kakar based on her research proposal regarding biomedical science in the field of immunology.

Her favorite place at UofSC is the School of Medicine’s lab, which Kakar says contains the latest equipment to aid research. But, she adds, the best thing about the state’s flagship university is the diversity.

Kakar has visited her family in Pakistan one time since leaving the country three years ago. She says when she sees the deprived condition of some of the women in Balochistan, she remembers her mother and her belief that education can change society and improve the quality of life.

“My path toward education was an improbable act. My mother pushed for my education against all odds and strong cultural pressures,” Kakar says. “No words can express my feelings or my motivation to serve my area and help the underserved. My goal as an educated woman is to shape the future of my country by educating the women of Balochistan.”