Courtney Truluck knew nothing of genetic counseling when she and her sisters were tested in the early 1990s for the gene mutation linked to ovarian and breast cancer. Her mother, then just 50, had been diagnosed with stage IV ovarian cancer and had the mutation.

Truluck was 22 years old when she discovered she had the same mutation and a better than 40 percent chance of contracting the same cancer that killed her mother at age 55.

That is where the USC School of Medicine’s Genetic Counseling Center came in. When Truluck was originally tested, she says, she and her sisters were given aliases to protect their privacy. “It was so early in the process,” she says. “No one knew how the information might be used.”

We all get very connected to each other. It’s really a special bond and we want to celebrate it.

Genetic counselors told Truluck to plan to live her life as she would have, which she mostly did. After her last child was born, she decided to have a complete hysterectomy. A few years later, she had her breasts removed and went through reconstructive surgery.

Aside from the early onset of menopause, Truluck says she has had few negative side effects from the procedures. Her husband has been supportive of her decisions and has adapted to “her new body.”

“We both have had to adapt,” she says. “But for me it was a no-brainer. My chances of getting cancer went from a certainty to the same as anyone else. I want to be here for my kids.”

In addition to providing the services Truluck and her family used to make very difficult life decisions, the Genetic Counseling Center also trains genetic counselors and has for 30 years. The field was in its infancy in 1981 when Janice Edwards joined the School of Medicine faculty. Four years later, she and professor emeritus Robert Young launched the USC genetic counseling master’s

program, the first such program in the Southeast and only the 10th in the U.S.

“I just took a chance on it,” Edwards says of her decision to study the genetic counseling. “I had a deep fascination with the science of genetics.”

Now with one of 31 such programs in the nation, the School of Medicine has more than 200 genetic counseling alumni leading the profession today. More than 130 students apply each year for the eight slots available for the master’s-level program. Many of them come from a traditional pre-med background; some have even been in other health care professions before choosing genetic counseling.

“For most people, you either you get genetics or you don’t,” Edwards says. “You have to love the puzzle of it. What we understand about genetics and genomics is changing all the time.”

But that is just half of the job. The other half is helping people like Truluck put that understanding to use.

“We are talking to people at some of the most important times in their life,” Edwards says. “One of the real draws for us in this field is the privilege of being involved in our patients’ lives.”

For the Genetic Counseling Center that adds up to about 2,000 patients a year. And while that seems like a lot, the counselors have the capacity to take more time with each patient than even a general practitioner or OB/GYN physician.

A real bond forms between patient and counselor that frequently outlasts the crisis event. Truluck, for example, has stayed in touch with her counselor and is on the program advisory board at the School of Medicine. She has even offered herself as a human test subject for counselors in training.

“They were so good at handling the information coming at us and the magnitude of the situation,” Truluck says of her original experience with genetic counselors. That is what made her want to help new counselors.

“It was hard the first time, but it is very interesting now to see how they work, looking at the family tree, the questions they ask,” she says. “They are educating some good genetic counselors. I was very impressed with all of them.”

The Genetic Counseling Center sees its patients on referral from doctors. Many, like Truluck, are learning about how their own genes may affect their personal health, but many are learning about the impact of genetics on their children — the ones who haven’t been born, or, in some cases, even conceived. 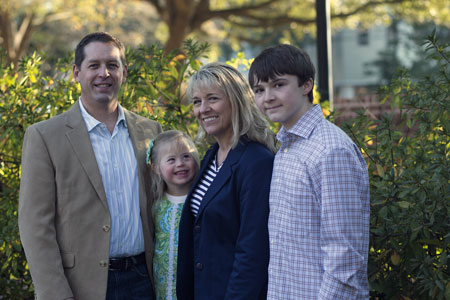 Mark and Padgett Mozingo with their children Lila and Garrett.

Padgett Mozingo was 42 years old and she and her husband, Mark, wanted to have a child.

“I had had a couple of miscarriages,” says Mozingo, who also has a son from a previous marriage. When they discovered she was pregnant, they immediately began taking all the precautions associated with a high-risk pregnancy because of her age. Early testing revealed that her baby had a hole in her heart. That discovery led to genetic testing and an in-utero diagnosis of Down’s syndrome.

“We went in that morning for what we thought was a one-hour consultation after our testing and ended up staying all day,” Mozingo says. “I cannot say enough about the compassion and kindness Peggy Walker showed us that day and every day since.

“We had a thousand questions and she was incredibly informed, even though it was mostly a lot of unknowns.”

Mozingo says she always intended to have her child, no matter the challenges. But the early diagnosis gave her, her husband and their extended families and friends time to prepare. That time was invaluable as baby Lila came bouncing into the world needing more surgeries in the first six month of her delicate life than most people have in a lifetime.

“We knew about the heart problems and what we were going to need to do for that, but we didn’t know about the extensive intestinal operations she would need before we could even get to the heart,” Mozingo says. And, there was that extra chromosome factor.

“We were able to get all our resources in order so that once Lila was physically healthy, we could take care of those needs as well,” Mozingo says.

Lila Mozingo is a happy, healthy 4-and-a-half-year-old. She has hour-long sessions of occupational, physical and speech therapy every week along with early intervention sessions. She also has become the face of Down’s syndrome in her community with the Mozingos sharing her story to encourage others going through the same thing.

“We call her limitless because we really think there is nothing she can’t do if we give her the resources she needs,” Mozingo says. “I know now, God gave me Lila because he knew I would share her.”

At a recent event celebrating the 30th anniversary of the Genetic Counseling Program’s first graduates, Mozingo, Truluck and dozens of other former patients gathered with alumni and faculty to share their experiences and to reinforce the bond that formed as counselors delivered what was often thought of as the worst news of someone’s life.

“We all get very connected to each other,” center director Edwards says. “It’s really a special bond and we want to celebrate it.”

For the future, says Edwards, one of the biggest challenges of the field is figuring out how to graduate more counselors. The two-year program annually accepts eight new students and graduates eight. Across the country, fewer than 300 new counselors complete their studies each year. But the staffing deficit is twice that number.

“There has never been a better time than now to be a genetic counselor,” Edwards says. “We have always had our students graduate into jobs.”

Part of that ease in finding jobs comes from the School of Medicine’s reputation for quality graduates. In addition to rigorous training, students complete five clinical rotations in their senior year and complete research for an original thesis.

In addition to working with academic medical centers and physician practices, genetic counselors also work in commercial labs where the testing is done and provide key communication between the lab science and physicians.

“Physicians also need our expert advice,” Edwards says. “There are so many options, and we stay up to date on the latest developments.”

The field also is spreading internationally, thanks in large measure to the work of Edwards, who is also the founding president of the Transnational Alliance for Genetic Counseling, created 10 years ago to bring together genetic counselors from around the world to help develop education and credentialing standards across borders. Her efforts were recognized by the National Society of Genetic Counselors with the 2010 International Leader Award, and she continues to lead with plans to meet other international leaders in Barcelona at TAGC 2016.

The global growth in genetic counseling also can be seen in international clinical rotations for Genetic Counseling Center students as well as students from around the world coming to Columbia to study.