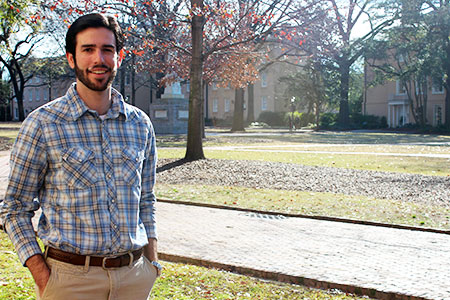 While Eric Bringley was still in high school, he began working with USC chemistry professor Stephen Morgan and continued as an undergraduate research assistant in Morgan’s lab as a Carolina student.

Eric Bringley believes the best way he can change the world is through science.

The senior in the South Carolina Honors College will take another step toward that goal next fall in the U.K. after being awarded a Gates Cambridge Scholarship –one of the world’s most prestigious international scholarships. Bringley will pursue a doctorate in chemical engineering focused in theoretical chemistry and stochastic modeling at the University of Cambridge.

He is the first University of South Carolina student to earn the highly competitive and prestigious scholarship, which was awarded to 35 academically gifted and socially committed students from 28 institutions in the United States. They will join about 55 scholars from other parts of the world at Cambridge

“We are so proud that Eric has earned Carolina's first prestigious Gates Cambridge Scholarship. His intellect, leadership and commitment to improving the lives of others are hallmarks of the Carolina experience and epitomize the qualities sought in Gates Cambridge Scholars,” said University of South Carolina President Harris Pastides. “I am delighted that he will have this tremendous opportunity to expand Carolina's global reach through his study, research and collaborations at Cambridge.”

The postgraduate scholarship program was established through a $210 million donation to the University of Cambridge from the Bill and Melinda Gates Foundation in 2000, which remains the largest single donation to a U.K. university. Since the first class of scholars in 2001, more than 1,500 Gates Cambridge Scholarships have been awarded to students from 103 countries and 600 universities.

Competition for a spot is fierce, with more than 4,500 applications for approximately 90 scholarships each year. The Gates Cambridge program places emphasis on both outstanding academic ability and social leadership in its admissions process. The students at U.S. institutions were selected from an initial field of 826 applicants, with 186 nominated by their department and 86 shortlisted in Cambridge for interviews by academics from the U.K. and U.S. at the Gates Foundation headquarters in Seattle in January. Bringley was assisted by the university's Office of Fellowships and Scholar Programs which provides advisement and support to students competing for national fellowships.

Bringley, of Irmo, South Carolina, will graduate in May with a degree in chemical engineering and minors in mathematics and chemistry from the South Carolina Honors College. At Cambridge, he will be one of the 13 U.S. winners who will pursue a doctorate, while 22 others will study for one-year master’s degrees.

“By applying to the Gates Cambridge Scholarship, I seek to surround myself with a diverse, motivated and selfless group of colleagues,” Bringley said. “Cambridge and the Gates Cambridge program will provide me with a platform to build upon my modeling and computational studies while applying them in an altruistic, interdisciplinary setting.”

Bringley’s interest in math and science began early, and he started his chemistry research while he was a student at Irmo High School. “I enjoy things that keep me challenged. My high school chemistry teacher taught at an accelerated rate. It made it fun to learn,” he said.

While he was still in high school, he began working with USC chemistry professor Stephen Morgan, and continued as an undergraduate research assistant in Morgan’s lab for two years as a Carolina student. His research career already has led him to complete 13 technical presentations and two publications.

“Research has always motivated Eric. He started as a high school student in my lab on a project to detect stains and dyes on fabrics. With Magellan Scholar funding, Eric spent a summer working at the Library of Congress on detection of magnetic tape sticky shed (the deterioration of the binders in a magnetic tape that makes the tape unusable) and is now co-author on a recent publication,” Morgan said. “At USC, Eric actively sought multiple research opportunities both on campus and abroad. I am delighted that he will represent USC as a Gates Cambridge Scholar.”

A 2014 Goldwater Scholar, he spent the summer of 2015 as an American Chemical Society International Research Experience for Undergraduates Fellow, conducting research in theoretical chemistry in Ulm, Germany. He will graduate from Carolina in May with a degree in chemical engineering and minors in mathematics and chemistry. He plans to focus his work on ways mathematical models can be used to attack energy issues.

“Energy is a focus that has piqued my interest,” he said. “The areas that interest me are the combustion engines and energy storage that have direct application to everyday life. By using computational tools, I hope to further knowledge and understanding to address and attack current roadblocks, such as energy storage.”

When Bringley is not in the classroom or laboratory, he spends time as a peer tutor and Magellan Ambassador, helping guide and motivate other Carolina students. He is in Phi Beta Kappa and is president of Carolina's student section of the American Institute of Chemical Engineers.

Gates Cambridge Scholarship recipients are selected on the basis of outstanding intellectual ability, leadership potential, commitment to improving the lives of others and the fit between the applicant’s qualifications and aspirations and the program at Cambridge. The aim of the Gates Cambridge program is to build a global network of future leaders committed to improving the lives of others.