More than meets the ear 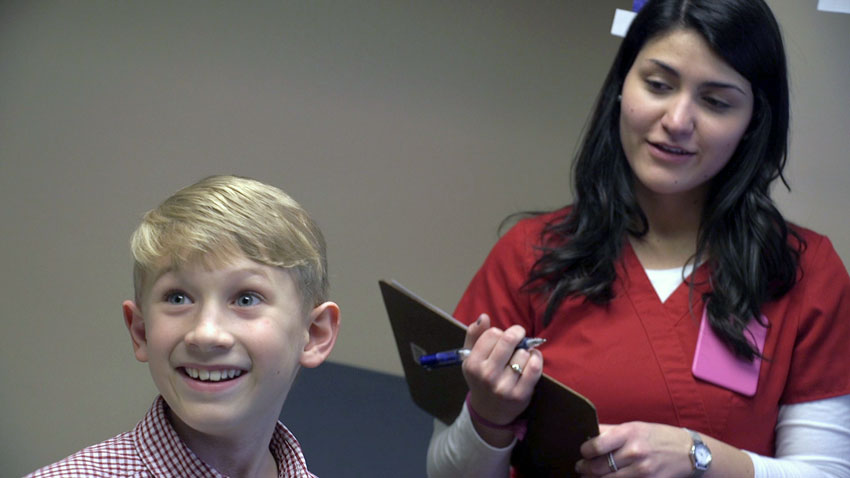 Camden Stodden couldn’t be happier — and like a lot of 7-year-olds, he’ll tell you all about it.

He had a great day at school. He just played a really fun game that involved jumping on a trampoline. He recently saw the new "Star Wars" movie and thought it was awesome.

At first blush, that may not seem like such a big deal. Again, he’s 7, and he has the energy, the enthusiasm and the winning smile to prove it. But it’s actually a huge deal, once you know Camden’s backstory.

Born with a form of receptive-expressive delay that makes it difficult for him to retrieve language, Camden represents a bit of a medical mystery. He started seeing speech-language pathologists in Texas before he could walk, and he’s been coming to the University of South Carolina’s Speech and Hearing Research Center one hour a week since he was 4.

“There’s no full medical diagnosis,” says Robin Stodden, Camden’s mother. “He started out not being able to talk at all. When he was in preschool, he didn’t know the difference between a letter and a sound, or that those symbols made up a word.”

But that was over three years ago, before the Stoddens moved to South Carolina for jobs at the university, before a friend recommended the Speech and Hearing Research Center, before Camden started working one-on-one with a speech-language pathologist and a rotating team of graduate students from the Communication Sciences and Disorders master’s program.

Using individualized, evidence-based therapies that incorporate age-appropriate physical activity, Camden’s team helps him develop communication strategies that work, in part, because they’re fun. The trampoline game, which requires him to leap for different streamers dangling from the ceiling while he works on his verbal skills, is just one example.

“Camden can’t wait for his day to come here because everyone is so excited to see him,” says Stodden. “Everyone’s giving him high-fives in the hallway, talking to him, asking how his day is going. It’s like a family when you walk in here.”

“Parents say they love coming here because as a university training program we have these young, energetic, eager-to-learn graduate students who are closely supervised by experts in the field,” says Speech and Hearing Research Center director and senior clinical instructor Danielle Varnedoe. “They know we’re keeping up with what’s state of the art.”

Part of the Department of Communication Sciences and Disorders, the center is home to approximately 120 graduate students at a time, plus 22 full-time academic faculty and clinical faculty, who see upwards of 5,000 patients a year, counting off-site services.

Those patients, who are by turns younger than Camden or old enough to be his great-grandfather, seek out the center’s expertise because they stutter, or they’ve lost language abilities due to stroke or Parkinson’s, or because they have a child with autism or selective mutism. The center also sees people struggling to acquire reading, writing and spelling skills and, of course, offers hearing aid fittings and cochlear implant services.

“We see a whole range of children and adults that have speech, language or hearing issues,” says Varnedoe, who herself specializes in childhood speech-sound disorders. “And we’d like to see even more.”

Collectively, the center records approximately 6,000 patient hours per year, and that’s not counting the hours students spend out in the community, which represents another important part of its mission.

“We can’t necessarily access all the populations that we need to access if we expect them to just show up here,” Varnedoe explains. “Go five miles any direction and you can find some pretty notable poverty, so there are transportation problems. One of our goals is equal access to equal care, but of course money is always an issue.”

Of course, patients aren’t the only beneficiaries of the Speech and Hearing Center’s broad-based approach. One of the center’s principle objectives is to educate the next generation of speech-language pathologists, and seeing so many different disorders firsthand is a big part of that equation.

“Because we’re in an urban setting, we have access to many different kinds of patients, and we give students access to a lot of different practicum sites, but I think what we really provide our students is an emphasis on clinical education,” says Varnedoe.

“We train our students to be good consumers of research, to engage in critical thinking right then and there when they’re with a client, not two days later after you finish the session.”

For second-year master’s of speech pathology student Valerie Swager, who already holds a master’s in exercise science from Carolina and now has an assistantship in the university’s aphasia lab working with stroke patients, the training is as rewarding as it is intense.

“It’s really hard and it’s rigorous, but I learn so much every day,” says Swager. “With people who have strokes, you can see the frustration, so I’m constantly thinking, ‘OK, what is the best strategy for them to communicate with me?’ For some people, it’s their gestures. For others, it might be writing. Everybody’s different, but once I find what works and I can use it with them, you can see this relief come across their face. They can finally have a conversation, or even just share a simple joke. We take it for granted, but it’s so meaningful.”

And it all comes back to a larger educational philosophy, according to Kenn Apel, chair of the Department of Communication Sciences and Disorders.

“We say to our master’s students, ‘We’re not educating you to be clinicians, we’re educating you to be clinical scientists’,” says Apel. “That’s on our website and on every syllabus. A clinical scientist sees each patient as a new case, or new situation, scientifically, not just as a person to treat. They consider the evidence, the client and family’s needs and use critical thinking to solve the problem.”

After Camden’s Thursday afternoon session, speech-language pathologist Jamy Claire Archer walks him to the parental waiting area, where parents like Robin can watch their kids’ sessions via live feed on one of several computers.

“My job is to make each person feel like they matter, even when it’s hard for them to talk, even when they can’t get their words out,” says Archer. “Their thoughts and their opinions matter. On the individual level, I think that’s where we make a difference.”

But right now, of course, Camden just wants to show off a tiny bucket of squishy blue beads he and Archer have been playing with in yet another therapy game. “Mom,” he says with a laugh as he extends the bucket. “Do you know what a water bead is? Here, squeeze one.”

Robin, of course, grabs a small handful, and the two marvel at their squishy texture, how weird the little blue beads feel between their fingers. It seems like Mom and her son are just goofing around after the session — and OK, sure, they are — but extending the therapy beyond the actual therapy room is also a critical part of the program.

“Obviously, bringing a child here once a week or twice a week isn’t going to get the job done,” says Varnedoe, who has been studying parent-child interaction with Communication Sciences and Disorders graduate director Hiram McDade.

“You need parents on board,” she says. “That’s true with almost everything we do with kids — the parents really need to get trained so that they can do activities similar to what we do in therapy, to carry what we do here over into the home and to make it fun, so it’s not seen as ‘therapy.’”

Whatever it’s called, it’s working for the Stodden family.

“Camden has grown by leaps and bounds developmentally, with his ability to find words, his articulation,” says Robin. “Having people like Jamy Claire and the grad students working 60 minutes intensively with your child is just amazing. His teacher this year said she wouldn’t even realize that he is delayed because he’s now so good at using these strategies. He has just blossomed.”