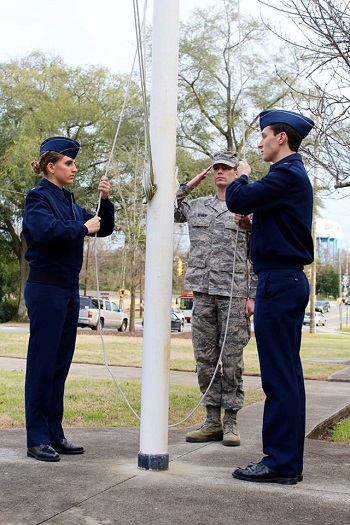 The Air Force ROTC Detachment at the University of South Carolina is open to all students and includes a combination of exercise, drill and learning to train qualified Air Force officers.

Cadet Grant Brannon joined the Air Force ROTC as a way to give back and serve his country, and hopefully help pay for his tuition at the University of South Carolina. Brannon, now a senior public relations major, is looking forward to graduation with a guaranteed job as a pilot for the U.S. Air Force.

“It’s really cool sitting here now as a senior and I’m getting to do exactly what I wanted to do when I walked in the door as a freshman,” Brannon said. “I didn’t start off as the best cadet in ROTC, but I think it’s a pretty good testament to this: You work four years as hard as you can for something that you want, then doors are going to open for you.”

The Air Force ROTC detachment at Carolina is one option that many students might not be aware of as a way of paying for school or securing a job after graduation.

The four-year program, which can be compressed into three years in some cases, is open to all students and includes a combination of exercise, drill and learning to train qualified Air Force officers. Most scholarships are given to high school students, but some can be earned after joining the program in college. However, it is a  competitive process.

Once in, cadets quickly learn the military life.

“We call the classes by ‘AS’ years so freshmen are AS-100s and seniors are AS-400s. Their ‘100’ year, the cadets do a lot of standard training or practical training,” Brannon said. “They learn how to march, they learn how to wear a uniform, they learn how to throw up a salute correctly, things like that. On the classroom side, they’re learning about history of the Air Force among other things. Sophomore year, you enter more of a rigorous training program and it gets you prepared for what we call field training in the summer after sophomore year, which is similar to basic training on the enlisted side. Then junior and senior year, you start what’s called “professional officer course,” or POC. Basically as a junior and senior you’re responsible for training the 100 and 200 cadets. We have an entire chain of command and you gain a lot of leadership experience leading these freshmen and sophomores, some of which don’t have much exposure to the military.”

Upon completing the program and graduating, Brannon explained, cadets are commissioned as second lieutenants in the Air Force.

Each week, cadets are required to attend two hour-long physical training (or PT) sessions on Tuesday and Thursday mornings, attend Aerospace Studies (or AS) courses with 100- and 200-level classes counting for one credit hour and the 300- and 400-level classes counting for four credit hours. Cadets also must attend leadership laboratory (or LeadLab) for two hours on Thursday, which entails learning about military drill, customs and other important military topics that will introduce new cadets to daily Air Force operations, structure and lifestyle. LeadLab can also be a time of cameraderie for the cadets.

Freshman cadet and international studies and Chinese major Carolyn Ross explained some of the things she has been able to gather from her first year in the ROTC program.

“I think you get a lot of life skills that you don’t get anywhere else,” Ross said. “You learn how to eat properly, for example we’re about to have a ‘dining out’ thing, where we learn how to eat professionally at a really nice dinner. You also learn how to be more respectful to older adults and how to interact with military personnel; you get to know your country’s history better overall, not just for Air Force.”

While it is a lot of work, the biggest bonus for cadets is the guaranteed job after completing the program.

“So all of my roommates and a bunch of my friends that aren’t in ROTC have been struggling trying to find jobs,” says senior cadet Christian Henson, a business management major. “They’ve been putting out resumes, going to different job fairs, going to interviews, stressing out. A few of them are just like, ‘Okay, well I can’t find a job so I’m just going to go to grad school.’ Whereas since I contracted, I’ve been like, as long as I don’t mess up, as long as I keep doing what I’m doing and get good grades, I’ve got a guaranteed job with good pay, great benefits and I can get to see the world.”

A minimum of four years of active duty is required if cadets complete the program, but some career fields in the Air Force require a longer period of service. Pilots, for example, must serve a minimum of 10 years. A cadet's major does not determine what position they will have in the Air Force.

Irwin, who has been in the Air Force for 19 years talked about some of the things the detachment and its cadets can do for military personnel and how being a part of the ROTC brings a change of setting.

“After a while, you can get disconnected from really what the rest of the country’s like and you show up to work on an Air Force base every day, you’re meeting very like-minded people and a lot of the people that you’ve known and worked with for many years,” Irwin said. “And here, you’re out on a college campus with new ideas and people that are starting to find their way in the world, and the energy they bring to that is really fantastic.”

The senior cadets' commissioning ceremony will take place at 9 a.m., May 6 at the Williams-Brice Nursing building.