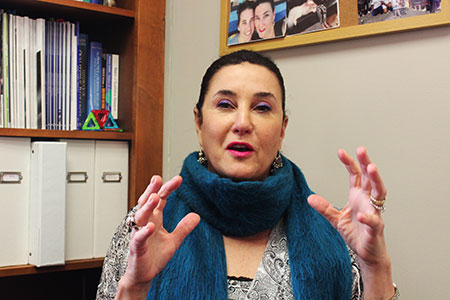 Ronit Elk joined the faculty of the College of Nursing in 2013 after a decade with the American Cancer Society and a position in the psychiatry department at the University of Texas Health Science Center at Houston before that.

Growing up the daughter of an itinerant Israeli ambassador, Ronit Elk nurtured a fascination with cultures that hardly anyone might have predicted would lead her to work to improve end-of-life care in rural South Carolina. But Elk’s international childhood experiences sparked a lifelong appreciation for how much culture can impact just about everything in life. That mindset is a large part of the reason she joined the College of Nursing in 2013.

Since her arrival, Elk has used her sensitivity to the effects of cultural collisions, which she says can be a fundamental cause of obstacles to health care access, to address longstanding ethnic differences in health outcomes that persist not just in the South, but all over 21st century America.

It took her some time to find her way to the Palmetto state, though. Soon after earning a doctorate in psychology at the University of Cape Town in South Africa about 20 years ago, Elk started her research career in the psychiatry department of the University of Texas Health Science Center at Houston. A decade of academic research was abruptly interrupted, however, when illness struck her family.

“I lost my mother, my father and my husband, all to cancer, and all within a few months of each other,” Elk says. “It was like boom, boom, boom.”

The experience was traumatic enough for her to take some time to re-evaluate her career, with a resulting modification to that career’s trajectory. After about a year that included time working on writing projects, she got in touch with the American Cancer Society, offering to work as a speaker for the organization, to communicate with the lay public as educational outreach. But the organization had other plans when they saw her vita: They wanted her to help build a new external grant program.

“The ACS is the biggest funder of cancer research, outside of the National Cancer Institute, but they hadn’t funded anything on cancer control, prevention, early detection, health disparities, those areas,” Elk says. “So to make long story short, I was there for 10 years doing that. But after 10 years, I was like, wait a minute, these people that we’re funding are having so much fun. I wanted to be out there with them, in the real world, making a direct impact.”

She found that situation at the College of Nursing, which offered the opportunity to contribute as a researcher to a discipline Elk is very passionate about: end-of-life care. Every life will come to an end, and suffering, Elk says, is an all too common part of that process.

“It’s not like in the movies, where somebody closes their eyes, and two seconds later they’re gone,” she says. “There’s pain involved, sometimes people can’t breathe or swallow, and sometimes people are in excruciating agony. Palliative care started as a way to help people who were at end of life, and it started with a focus on pain as the main symptom, but then it became more broad to try to alleviate all kinds of suffering.”

Every life will come to an end, and suffering, Elk says, is an all too common part of that process.

Elk combines research on palliative care, which complements the curative care physicians are traditionally known for with research on another of her passions, health disparities. Two-and-a-half years ago, she started a project that might help bridge the gap in end-of-life health care access and outcomes that exists for African-Americans, particularly in rural settings. Working with a diverse group of community members in Beaufort, S.C., her research team has identified cultural differences that doctors should take into account when working with people from different backgrounds.

“So here’s one example, prognosis,” Elk says. “With the white patients in the group, they were very clear. ‘Ask me, ask the patient, ask the family, and if we want the prognosis, we’ll ask for it. But whatever we decide, please respect it.’

“But with the African-American group, it’s not what they want. A doctor should not talk about prognosis, and not ask the patient whether they want to know — and it’s not out of disrespect, it’s quite the opposite. You can tell them what’s happening with the body, like how the lungs slow down when they fill up with fluid. And if somebody asks, they should never, ever give a day and time. They should say, ‘In my experience, people with these symptoms could go on for a certain amount of time, but it’s not me that determines that, it’s up to God.’ ”

With an upbringing that included 12 different schools in places including India, Turkey and Uganda, Elk is bringing a new level of cultural awareness to bear on health care problems in South Carolina. And she is leading a research team focused on bringing the community’s voice and participation into the solutions they create.

Ronit Elk was the guest editor of a recent special issue of the Journal of Palliative Care focusing on end-of-life care for African-Americans.