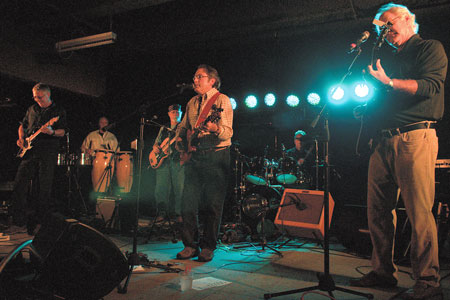 The Doctors Lounge, a band of musical physicians, raises money for the Columbia free clinic with a concert.

Joe McGowan loves his career. A surgeon with Germain Dermatology in Mt. Pleasant, S.C., the School of Medicine graduate makes a good living, gets to live in the beautiful Lowcountry and enjoys the satisfaction that comes from healing people with skin cancer.

There’s a lot more to McGowan’s life than Mohs micrographic surgery, though. You see, McGowan, ’01 chemistry, ’05 M.D., is also a serious musician and songwriter — with not one but two albums coming out in 2016.

“I’ve been biting off as much as I can possibly chew just to get these songs down as perfectly as I can,” he says. “Right now, every day that I’m not at Germain Dermatology I’m at the studio or doing something with my music. I don’t take days off.”

The S.C. native started piano lessons at age six and eventually attended the Governors School for the Arts in Greenville. Not surprisingly, his favorite songwriters tended to be other pianists — Elton John, Bruce Hornsby, Ray Charles, Tori Amos. “I wasn’t athletically talented, so piano sort of became my sport,” he says with a laugh.

He sang in church and started composing instrumentals in late elementary school. Gradually, he also began to experiment with lyrics for his own compositions but says he didn’t find his true voice as a songwriter until much later.

“The biggest obstacle in my life has been coming to terms with who I really am,” he says. “I’m gay, but I kept that in the closet for many, many years — until after medical school, after my residency. But in the process of speaking my truth as a person, the lyrics just came so naturally and effortlessly. I feel like it’s something I was put on this earth to do.”

After taking voice lessons in New York a couple years ago, McGowan began work on his debut CD, “Dirt Road Revival,” with a producer in the city. He had so much music to get down, though, that he began recording a follow-up, this time in Charleston, before he’d even completed the final vocal dubs on the first.

“I love to write music, but going to medical school, and now being a surgeon, I haven’t had a lot of time to practice,” he says. “Performance is something I want to focus on next. But first I just had to get these songs out.”

And for McGowan, the process of getting them out has made the good life even better.

“Music has allowed me to become a better surgeon, a better partner, a better friend, a better brother, a better person,” he says. “I love being a surgeon, healing patients, but I could not be Joe McGowan without also doing my music.”

Putting on a clinic

The annual benefit for Columbia’s Free Medical Clinic raises tens of thousands of dollars and generates priceless publicity, but in the 11 years since clinic director Todd Crump,’92 M.Ed., ’98 M.D., began organizing it, the November event has also showcased some of the most talented physicians in town — physicians who also like to kick out the jams.

Take Timothy Malone, ’93 M.D. A psychiatrist at Palmetto Health and Three Rivers Behavioral Health and wellness director for the University of South Carolina athletic department, Malone has been strumming his six-string and blowing the alto sax since he was a teenager in Summerville, S.C.

Back then, it was Navy dances and TV jingles for local businesses, usually alongside his big brother. Nowadays, it’s jazz combos with local saxophonist Skip Pearson, the occasional solo gig and, of course, the Doctors Lounge, which he’s been a part of since Day One.

“It’s sort of like back when I was playing for the sailors,” says Malone, who once flirted with a full-time career in music. “I treat a lot of patients in this town, and many of them have utilized the services of the free clinic over the years, so it’s a way of giving back. Don’t get me wrong, I’m a ham, I love to perform, but the cause just couldn’t be greater.”

And rocking out for a good cause has fringe benefits, according to musician-physicians like Brooks Mays. An endocrinologist at Pinehurst Medical Center in Pinehurst, N.C., Mays taught himself guitar listening to R.E.M. and Pink Floyd, but as his medical career took off, the Rickenbacher and Fender Strat fell slowly out of tune.

“If it weren’t for Doctors Lounge, I probably wouldn’t have picked up my guitar for years,” says Mays, ’95 master’s, ’02 M.D. “That really rekindled things. I hadn’t lost my love for music, but between grad school, medical school and everything else, I had lost the time.”

Now, despite the busy workweek, Mays finds time. He recently built a small “rock room” in his basement for his growing guitar collection and outfitted it with amps and recording equipment. Then, after teaching himself mandolin, a musician friend in Washington, D.C., invited him to play on an upcoming album.

“Medicine is fascinating, but it can also be incredibly stressful,” he says. “Music is an outlet. I can play for an hour or two and not even realize it because I’m in the zone. It’s like having a great workout. The endorphins are flowing. It takes you away.”