On the hunt for conservation 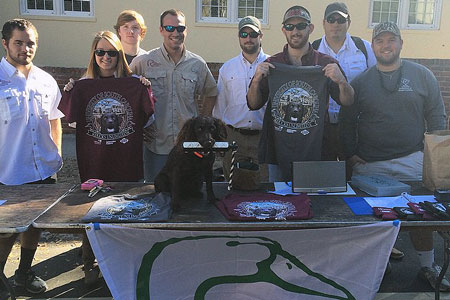 The UofSC chapter of Ducks Unlimited was ranked 10th among collegiate chapters by the conservation organization for their work this year.

Teamwork, leadership, passion and hard work. These are just some of the words, Austin Royal and Patrick Pope would use to describe the success of their student organization, Ducks Unlimited at the University of South Carolina.

The chapter supports the mission of the national Ducks Unlimited organization to protect, conserve and restore wetlands and waterfowl populations.

For Pope and Royal, their passion for conservation started at an early age.

Pope is the current president of the chapter and has been a part of Ducks Unlimited all his life. His father started a chapter in his hometown in Chester, S.C. He grew up in the organization and now seeks ways to uphold the mission of preserving the wetlands.

Royal, who was the past president of the chapter, has been involved in the organization for close to 10 years. A particular interest he has is with the youth programs.

“Growing up, I would hunt with my uncle and, one day, we went to a Ducks Unlimited banquet,” he said. “From then on, I became more involved in the organization.”

This experience from his youth is a reason why he focuses on the youth programs that Ducks Unlimited provides. Royal’s leadership has grown within the organization by serving as a committee member, board member and now serves on the state committee.

Last year, the chapter raised over $32,000 for wetlands conservation.

“This is the most money our chapter has ever raised and the most for any collegiate chapter in South Carolina,” Pope said. “A lot of hard work went into raising this money and we as a chapter are proud of the final result.”

Some of the ways the chapter worked to raise money were with raffles, banquets, obtaining sponsors, conducting live and silent auctions and selling Ducks Unlimited merchandise.

“We were able to raise this money because of our teamwork. It takes a lot of hard work and determination,” Royal said. “What we do as an organization is we build a group of people that want to work hard and are very charismatic about wetlands and conservation.”

Teamwork is one of the critical components to what Pope believes is the foundation to support their mission.

“We take everyone’s ideas and put them together so we can be innovative and think of better ways to raise money for wetlands conservation,” he said.

On top of the fundraising success, the chapter was nationally recognized for its work by being ranked the number one chapter in the state.

“This ranking demonstrates that the chapter has great leadership, pride in their university and a passion for wetlands conservation,” said Mark Horobetz, national director of youth and education programs for Ducks Unlimited.

Each spring, the Ducks Unlimited national organization announces its Sweet 16 which is a list of top-producing volunteer university chapters in the country. This group is measured on their fundraising efforts and overall chapter strength. The university’s chapter was ranked 10th this year based on their work.

“The students’ love for the outdoors ignites their passion for conservation and their incredible ability to work together fuels that drive. This passion has directly resulted in them being one of the most successful chapters in the country,” said Scott Wolfe, faculty adviser for the chapter.

Royal attributes the chapter’s achievements to their activity both within and outside of campus.

“We’re not a cut-and-dry chapter, we always try to change things up and incorporate something new,” he said. “We’re going out and getting sponsors and getting people to join our organization and attend our meetings.”

The chapter continuously works hard to see a wetlands sufficient to fill the skies with waterfowl today, tomorrow and forever.