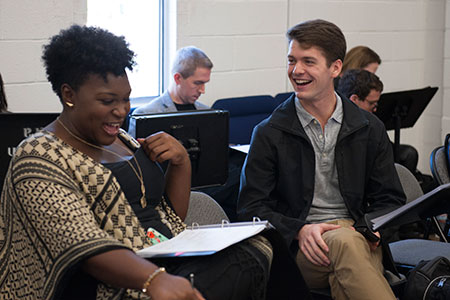 David “Clay” Mettens is already hitting high notes — or, more precisely, writing them as a composer — in his young career in music. Not even three years after finishing his undergraduate degree at the School of Music, he has composed a mini-opera that was part of a sold-out performance at the Kennedy Center in Washington, D.C.

The 20-minute piece, "Alexandra," resulted from Mettens’ selection as one of just three composers from across the country for the American Opera Initiative early last year. He was paired with librettist Joshua McGuire, an up-and-coming writer in the opera world, and they were provided the mentorship of established professionals in the field. The two brainstormed ideas for the story, McGuire wrote the book, and Mettens conceived and composed several drafts of the music last summer.

The process was just getting started, though, as Mettens traveled to Washington, D.C., in the fall for an intense three-day workshop. It involved morning rehearsals with three singers and a pianist, then consultations with McGuire and reworking of the music all afternoon and into the evening.

“The piece got a lot better,” Mettens says of the process, which he continued with additional revisions at home after the workshop, as well as reworking the music into its final form for three singers and 13 instruments. The finished work was performed in December in a program of all three composers’ mini-operas. Tickets sold out beforehand, necessitating the scheduling of a second performance later in the evening. One patron at the first showing was Ruth Bader Ginsburg, a Supreme Court justice with an ear for opera, who acknowledged the composer-librettist teams backstage afterward.

Mettens, also an alumnus of the South Carolina Honors College and a McNair Scholar, says the experience recalled the importance of an academic milestone at his alma mater.

“My senior thesis for the Honors College was a 25-minute piece for a singer and nine instruments, "Songs for My People." I put together an ensemble to give the first performance of the piece at USC in April 2013. It was later performed at the Cincinnati College-Conservatory of Music, and a recording of that performance was the centerpiece of my application to the American Opera Initiative,” he says. “So I can really trace the opera that premiered in December back to my senior thesis project as an undergrad.”

He says his training at Carolina has helped him navigate further studies in academia, which include two years earning a master’s degree at the Eastman School of Music in Rochester, N.Y., and his current position as a doctoral candidate in composition at the University of Chicago.

He also grew as a composer in ways that would not be reflected on a college transcript. As a Magellan Scholar, for example, he studied the characteristics of pipe organs using computer spectral analysis of the sound’s waveforms with mentor Reginald Bain.

“I didn’t realize how important it would be at the time, but I really learned to listen in a new way as I was working on that project,” Mettens says. “And it’s had an impact on what I am writing now, music that is very different from the final result of my Magellan project, and I never would have guessed that. The skills that I acquired and the research I did really informed my thinking and my hearing of music over the past three years.”

The Carolina faculty provided the guidance and tutelage he needed, Mettens says. The result is an early career composer whose works are regularly performed across the country (13 performances in this spring season alone), and even internationally. His orchestra piece “Sleeping I am carried …” will be featured in a concert with the Brussels Philharmonic in their upcoming season.

“I had great mentors, all around, at USC, and an excellent composition teacher, John Fitz Rogers,” Mettens says. “My time with him was just transformative. I learned a lot of my foundational skills at USC and I’ve refined them and expanded them and continue to improve, but I think everything that I did at USC set me up to do what I’m doing now.”

Many of Mettens’ pieces are available online. He recently received a commission for Music in the American Wild, which will commemorate the 100th anniversary of the founding of the National Park Service. His work will also be performed by the Civitas Ensemble on the Ear Taxi Festival in Chicago in October.

The McNair Scholars program for out-of-state students is just one of several scholarship opportunities for highly qualified students at UofSC. Visit the Office of Fellowships and Scholar Programs website to learn more.

Visit the Office of Undergraduate Research website to learn more about the Magellan Scholar program and many other research opportunities at South Carolina.