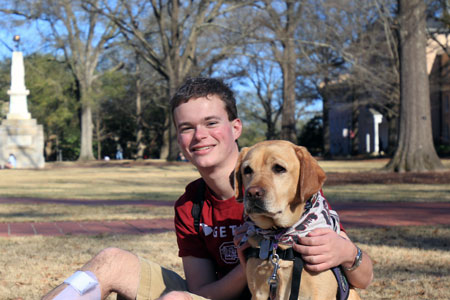 Jory Fleming has been named a 2016 Truman Scholar, one of the most prestigious national scholarships in the U.S. Fleming has autism and says his service dog, Daisy, has helped him navigate college life.

Jory Fleming’s relationship with the University of South Carolina started even before he was a full-time student here. While still in high school, he was taking classes at the university when he met Jean Ellis, an associate professor of geography.

“I probably interrupted something important she was doing, but she still took time to talk to me about my interest,” Fleming recalls. He still works with her today: “We regularly send funny cat videos to each other at the end of emails!”

In those few short years since high school, Fleming’s relationship with the university has broadened and deepened: The double major in geography and marine science is both a Capstone Fellow and a Magellan Scholar.

Now, there’s an impressive distinction to add to Fleming’s already considerable accomplishments: He has been named a 2016 Truman Scholar, the Office of Fellowships and Scholar Programs has announced.

The Harry S. Truman Scholarship Foundation was created by Congress in 1975 with the mission of selecting and supporting the next generation of public service leaders. The Truman Award has become one of the most prestigious national scholarships in the U.S., recognizing students for superior academic ability, a strong record of service and leadership and plans for careers in public service. Recipients of the award receive a $30,000 scholarship toward graduate school and the opportunity to participate in professional development programming to help prepare them for careers in public service leadership.

“We are so proud that Jory has earned the Truman Scholarship,” says University of South Carolina President Harris Pastides. “His passion for service, both direct and through academic research, is a hallmark of the Carolina experience and epitomizes the qualities sought by the Truman Foundation. I am delighted that he has been recognized for his commitment to leadership and public service, and will have this tremendous opportunity to demonstrate that Carolina students truly have no limits to the impact they can make on their community.”

Though only a junior, Fleming — who also is a 2015 NOAA Hollings Scholar and a 2016 Goldwater Scholar — is already having an impact. With a focus on GIS and mapping data as a method of communicating on behalf of the ocean, he has worked with numerous faculty mentors on research ranging from aeolian sand transport and phytoplankton food web modeling to aquaponics systems and geographic education.

Fleming is also pursuing a biogeography research project with the National Park Service and has interned for the S.C. Air National Guard and Beitz & Daigh Geographics. This summer, he will intern with the NOAA Digital Coast Program, studying sea level rise and 3D GIS. He plans to pursue a master’s in marine affairs and a doctorate in oceanography.

In addition to his scholarly pursuits, Fleming is fully engaged in the community, volunteering with Cocky’s Reading Express and PAALS (Palmetto Animal Assisted Life Services).

“I have autism, and the classic hallmark of autism is that social interaction is difficult,” Fleming says, crediting his service dog, Daisy, with helping him engage with others. “One thing that I’ve surprised myself with is that before I came to USC, I would have never thought that I could do something like Cocky’s Reading Express. That whole concept had been foreign to me. As a result, it’s been important for me to grow in that way and to overcome that challenge. Without Daisy, I would have never been able to overcome that step or try something that’s not in my comfort zone.”

Having personal challenges himself has made Fleming more aware of what others face, too.

“In my experiences, I couldn’t have overcome some of my challenges without the support of others,” he says. “So in some way, that makes me want to give back to others and help them with their challenges.”

Candidates for the Truman Scholarship go through a rigorous, multistage selection process. In 2016, a record 775 candidates were nominated by 305 colleges and universities. The 200 finalists for the award were interviewed in March and early April; 54 were selected. Fleming was assisted by the university’s Office of Fellowships and Scholar Programs, which provides advisement and support to students competing for national fellowships. The university has had seven previous Truman Scholars.

Truman Scholars will receive their awards in a ceremony at the Harry S. Truman Presidential Library and Museum on May 29.

USC sociologist Shelley Smith has served on the campus Truman Committee for more than two decades, chairing it for most of that time and working with seven of Carolina’s previous eight Truman scholars.

“I’ve always felt it to be a supreme privilege to be able to work with such accomplished students,” she says. “Our scholars have come from a diversity of backgrounds over the years, and Jory’s success as a scientist is remarkable. It takes a certain type of passion and leadership to be able to explain and utilize scientific data for public service, and Jory is very convincing in his passion for data and the importance it plays in shaping policy. We are thrilled that he has been selected as a scholar.”