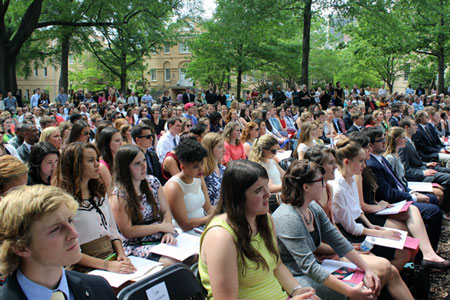 The annual Awards Day program was held on the historic Horseshoe on Thursday.

Riley Xavier Brady, James Frederick Weber Pike and Caroline Linnea Westberg received the Sullivan awards, the university’s highest honor for undergraduates. Sullivan awards are given each year for outstanding achievements, campus leadership, exemplary character and service to the community. The award is named for the 19th-century New York lawyer and philanthropist.

Morgan Elaine Lundy received the Steven N. Swanger Leadership Award, the university’s second-highest undergraduate honor. The award is named for a former president of Omicron Delta Kappa (ODK), which sponsors the university’s Awards Day. It is given to a graduating senior for exemplary leadership and for making significant contributions to the Carolina community.

A full list of the university's award winners is available here.

Brady, a McNair Scholar and member of the South Carolina Honors College, maintained a 3.912 GPA as a marine science major. He also received the Outstanding Undergraduate Award in Marine Science and was recognized with a graduate fellowship from the Department of Energy. He is a 2015 Goldwater Scholar, a 2014 Magellan Scholar and a 2013 Hollings Scholar.

He is a member of Beta Theta Pi Fraternity, serving on the new member education committee for three years; was director of education for Green Greeks; and was the co-founder for Walk Home Cocky, a safety initiative on campus.  Brady was a University 101 peer leader, intern in both the Office of Fellowships and Scholar Programs and Sustainable Carolina, a Magellan Ambassador for the Office of Undergraduate Research and a student mentor for Buddies Beyond Borders, Freshman Council and several other organizations. He worked all four years as an undergraduate research assistant in the Ecosystem Oceanography and Climate Change Lab.

In addition, he plays the guitar at venues around Columbia, and he was named the 2014 Homecoming King.

In his personal statement, he says: “Looking back on my years, I feel that I have accomplished my initial goal of making use of the diverse opportunities around me and to leave an impact in the process. Most importantly, I believe that I have exemplified the Carolinian spirit along the way: my involvement has been well-rounded, passionate, and genuine; I have lead, studied, and served in many contexts; my words and actions have embodied the Carolinian Creed; and I have made lasting connections with my peers, professors, and community. Although proud of my accolades and involvement, I am most concerned with being remembered for my character. To me, an outstanding student is not one who is consumed with titles, plaques or an impressive resume; rather, they find success in their endeavors while striving to be a role model to others.”

Pike has been a student-athlete and involved in numerous student activities at Carolina while earning a 3.934 GPA in biomedical engineering. A Hamilton Scholar, he is a member of Phi Beta Kappa and served as treasurer for Tau Beta Pi, the engineering honor society. He participates in undergraduate research as a research assistant at the School of Medicine.

As a member of the Gamecock baseball team, he was redshirted in 2013 and played in both the 2014 and 2015 seasons. He served on the Student Athlete Advisory Committee, where he helped organize community service activities for all student-athletes. He also made the All-SEC Honor Roll all four years. He is a member of Sigma Phi Epsilon Fraternity and the Biomedical Engineering Senior Design Project Team.

In his personal statement, he says: “When I was young, I learned the importance of a strong work ethic. My dad always told me that in order to succeed, I had to work as if there was always someone out there working harder and doing more than me. My mom instilled in me a desire to perform well in school and always stressed the importance of maintaining good grades and getting a quality education. These core values are now a part of me. Of all my activities, I believe my greatest contribution to the university comes from my involvement in the Student Athletic Advisory Committee. I was honored to be chosen by my team to be one of our two representatives. An outstanding senior demonstrates significant achievement in service, leadership and academics, and I have strived to exemplify these values in all I have done during my time at USC.”

As an international studies major, Westberg has maintained a 3.955 GPA while being involved in numerous leadership activities. She was named USC’s Outstanding Woman of the Year for 2016 and is pursuing graduation with leadership distinction in two tracks – global learning and professional and civic engagement.

A Woodrow Scholar, she is a resident mentor, a Leadership Scholar and a Green Scholars mentor. As a senior, she founded Women LEAD, a women’s leadership certification program in the Leadership and Service Center. She was involved with residence hall government and mentored students through the Emerging Leaders Program, Buddies Beyond Borders and as a conversation partner for English Programs for Internationals.

After her sophomore year, she took a gap year and served as a member of the AmeriCorps National Civilian Community Corp, where she devoted 1,700 hours to community service through a partnership with the Federal Emergency Management Agency. During that time, she received the Congressional Award given by the U.S. Congress for outstanding commitment to community service, along with the President’s Volunteer Service Award. After returning to Carolina for her junior year, she studied abroad in Brussels, Belgium, and worked as an intern at the Fulbright Commission of Belgium, Luxembourg and the United States. She has participated in several alternative break trips, including going to Thailand to work with elephant conservation.

In her personal statement, she says: “My impact on the Carolina community has been shaped by my drive to empower others to lead and find their own potential to create positive change within their corner of the world. I have discovered a simple idea: leadership empowerment cultivates connection and drive. By guiding others through the exhilarating process of realizing their leadership potential, inspiring them to harness their unique leadership power, and pushing them to lead within their own communities, I have become aware of the dynamic and formidable nature of this idea. My most noteworthy contribution at USC is my personal endeavor to engage this idea by establishing a sustainable and diverse Women’s Leadership Certificate Program through the Leadership and Service Center that creates a supportive community of women to explore the challenges we face in society, discover their own leadership potential, and empower them to lead fearlessly within Carolina and beyond.”

Lundy, the recipient of the Steven N. Swanger Award has, earned a 3.984 GPA as an English major in the Honors College while focusing on gaining skills through leadership, service and mentoring others.

She is a McNair Scholar and a member of Omicron Delta Kappa and Phi Beta Kappa.

She has devoted many hours in the Leadership and Service Center, serving as the alternative breaks student coordinator and site leader for several trips, an impact weekly service program site leader, flood relief coordinator and social justice dialogues facilitator.

Lundy was a resident mentor, a mentor for the Emerging Leaders Program and Pillars for Carolina extended orientation mentor. She has been president and treasurer of INK!, the undergraduate English association. She is pursing graduation with leadership distinction in community service, global learning and professional and civic engagement.

In her personal statement, she says: “My ability to become ‘outstanding’ at USC is simply due to the sheer number of opportunities available to grow as a student, leader, citizen and person while blazing new trails and starting initiatives. Flourishing in this culture, I pushed academic limits in my creative research and dynamic course load, pushed myself to take on leadership roles in the organizations I am passionate about, and supported others in finding their way at USC through mentorship roles and service leadership. The education USC has given me, and what I have sought and found for myself through beyond the classroom experiences, will carry with me in a career continuing these passions to equip and empower others to succeed.”