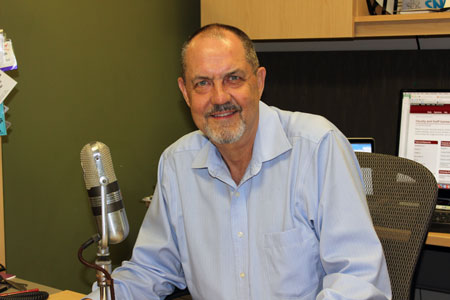 "Occasionally, a student might look back and scowl, and some will look back and smile if they have a difficult-to-pronounce name and you get it right." — senior journalism instructor and retiring commencement announcer Harvie Nachlinger

Vice President Joe Biden was wrapping up his speech at Carolina’s spring commencement ceremony two years ago, and graduating students — more than 1,400 of them — were about to start processing across the stage.

There was just one problem. Two Secret Service agents had positioned themselves in front of the stage, standing in the exact spot beside microphones where the ceremony’s two announcers needed to be.

The chief announcer, Harvie Nachlinger, envisioned trying to persuade the agents to reposition themselves or quickly moving the mics if the agents wouldn’t move.

“But as soon as the vice president was done speaking, he left the stage and the agents exited with him — problem solved,” says Nachlinger, a broadcast journalism senior instructor who has announced graduates’ names at nearly every Columbia campus commencement ceremony for the past 11 years.

This year’s spring commencement will be his last — he’s handing on the announcing responsibilities to others as he contemplates retirement.

Carolina is one of the few large public universities that still announces each graduate by name, even as the number of graduates has increased dramatically. For Nachlinger, it’s just a matter of speed and diction.

“The whole thing is based on keeping a pace, reading a full name every three or four seconds,” he says. “We’ll blow a few names if we’re not able to get a phonetic spelling from the graduate beforehand, but we have to keep going. Occasionally, a student might look back and scowl, and some will look back and smile if they have a difficult-to-pronounce name and you get it right.”

Along with the challenge of quickly pronouncing so many names, there are other distractions for commencement announcers, Nachlinger says. Some exuberant family members and friends just can’t seem to hold their applause until the end, especially if the graduate walking across the stage is a well-known student-athlete or someone who played the role of Cocky (traditionally, those students wear the big yellow Cocky feet at commencement). “You just pause an extra second or two until the applause dies down,” he says.

Nachlinger came to USC to earn a master’s degree in journalism after 35 years in radio and TV, most of it as a manager. He was offered a faculty position after his first year in the graduate program and has been here ever since. The commencement announcing gig isn’t part of his regular duties, but he’s enjoyed doing it.

“It adds a lot to the whole graduation experience,” he says. “And I try to read as many of the of the mass communications graduates’ names as I can and meet with them before the ceremony starts. It’s the final sendoff for the ones I taught.”