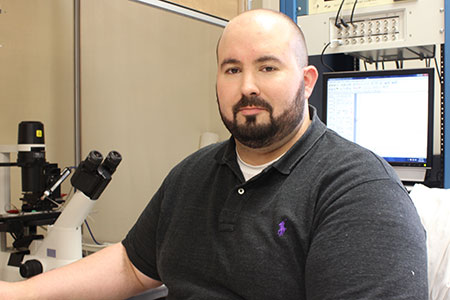 Aaron Provence earned his bachelor's degree in biology from the College of Arts and Sciences in 2012. He was then admitted to Carolina's Integrated Biomedical Science Graduate Program, which allows students to experience different kinds of biomedical research in their first year of graduate studies through rotations in laboratories located in the School of Medicine, the College of Arts and Sciences, the South Carolina College of Pharmacy and the Arnold School of Public Health. Provence chose to affiliate with Georgi Petkov's laboratory in the SCCP.

Aaron Provence’s doctoral research in the South Carolina College of Pharmacy might be focused on a very specific disorder, overactive bladder, but he hopes that the insight he’s gaining as a research scientist might have even wider medical impact.

Don’t take that the wrong way. The malady he's studying right now might not be life-threatening, but it's a serious problem, and he knows it.

“The statistics say that it affects about 17 percent of the Western population,” Provence says. “And they say it’s under-reported as well.” That works out to well over 50 million people in the United States dealing with overactive bladder, a condition that can make life very difficult every day. It becomes more prevalent with age and is sometimes the reason an elderly individual is forced to move into a nursing home.

In the search for a drug that might alleviate overactive bladder, Provence is studying a medication, retigabine, that is approved in the U.S. for a different use altogether: as an anticonvulsive. One of its side effects is to cause retention of urine, so Provence, working in SCCP professor Georgi Petkov’s lab, has been researching its effects on a very fundamental cog in the bio-machinery of a bladder: the ion channel.

An ion channel is a collection of several proteins that fit together to form what is essentially a tiny tube that floats in a cell’s membrane, the barrier between the cell’s contents and the rest of the world. One end of the tube is inside the cell and the other faces outward.

Depending on what's going on nearby, the protein building blocks that make up the ion channel can be made to snap into different conformations, and they do so in such a way that either opens or closes the tube. When it’s open, ions, such as as potassium, sodium or calcium, rapidly flow through it. When it’s closed, nothing flows.

In humans, cells build a wide range of ion channels — dozens of subtypes — that are tailored to very specific cellular needs. A cell can use ion channels to regulate what goes in and out of the cell and also to send signals to other cells.

“We want to know how the expression pattern is different from other tissue systems,” Provence says. “That way we can gear the drug discovery efforts to make a more specific therapeutic drug, so that you can target the bladder with minimum collateral effects elsewhere.”

The National Institutes of Health like what they’ve seen of his work so far. He earned a three-year F31 NIH fellowship that started last year, and he credits the process of applying for a SPARC grant from the Office of the Vice President for Research as integral to that success.

“The first time I applied for the SPARC fellowship I got rejected,” Provence says. “That was actually a good experience because it gave me an opportunity to get feedback from reviewers at the university and work on improving my strategy and the proposal. That laid a solid foundation for my application to the NIH the following year.”

After he finishes at Carolina, Provence is planning a postdoctoral experience where he can continue his research of ion channels, but likely with a different focus. Putting ion channels at the center of his studies has given him a broad array of opportunities in pharmaceutical research.

“Studying ion channels as drug targets transcends the urinary bladder,” Provence says. “The science can be applied to other conditions, like seizures, hypertension, cerebral vasospasm. It’s a good foundation for where I want to go.”