Another way to hail Carolina

How long has it bothered John Herr that Carolina’s alma mater, “We Hail Thee Carolina,” is paired with a tune also used by other universities?

More than half a century.

Herr, distinguished professor emeritus in the biology department, came to the University of South Carolina from Virginia in 1959. And for all that time, the 86-year-old botanist has been mildy miffed that the poem “We Hail Thee Carolina” — written by UofSC English professor George Wauchope in 1911 and adopted by the university in 1912 — hasn’t been set to its own music. Instead, it is sung to the tune of “Flow Gently, Sweet Afton,” written by Jonathan Spillman in 1837 to accompany a 1791 poem by Robert Burns. 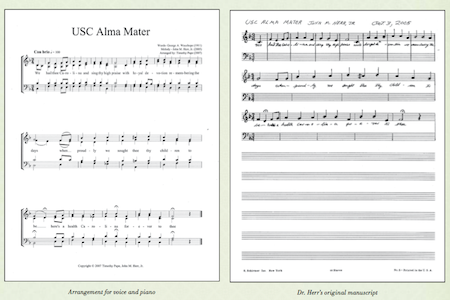 John Herr's original manuscript (right) and an arrangement for voice and piano.

So, in 2005, Herr decided to do something about it. Though he has little formal musical training, he sketched out a simple alternate melody on sheet music. Then he took it to a pianist, School of Music graduate Tim Pape, who arranged the tune for voice and piano in 2007. Later, Herr took his tune to Tayloe Harding, dean of the School of Music.

“I did not pay a lot of attention at first,” Harding says. “But he was insistent and passionate.”

Harding helped Herr take his music to the next level: The music school held a contest in 2009 to solicit a choral arrangement for Herr’s tune; John Maynard, a music student at the time, was chosen as the winner. Maynard’s arrangement was then performed by the USC Concert Choir, conducted by Larry Wyatt.

The experience of having his tune brought to life has helped build a deeper relationship between Herr and the School of Music, too. With funds contributed by Herr and his wife, the School of Music established the annual John and Lucretia Herr Composition Award, open to all music students.

“We really feel strongly that it’s a good thing to support,” Herr says of the award. “I really think music may save civilization. Science will help — but music will do it.”

Though Harding is glad to have helped Herr’s tune come to life, he is clear that the School of Music is not lobbying for a change.

“I am not against the idea of an original tune, but it is not the School of Music's place to bring that to the attention of the Carolina community,” Harding says. “It would need to be more grassroots than that, and that is what John is doing.” 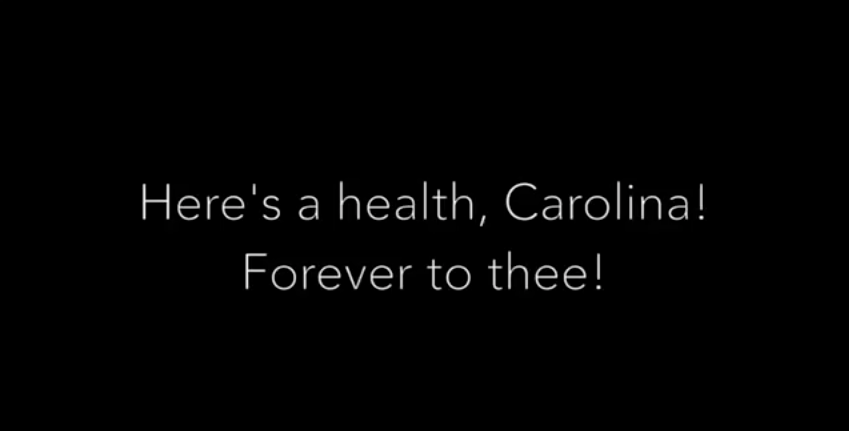 Harding also notes that Herr is not the first person who has tried to replace “Flow Gently, Sweet Afton” as the tune for Carolina’s alma mater.

“There is a history of other people having tinkered with original tunes that never caught on,” Harding adds. “The tune ‘Sweet Afton’ that we sing it to is so well known, and it is just ingrained in the culture.”

Herr’s quest to create a new melody for “We Hail Thee Carolina” took him deep into the history of university alma maters. One of his many discoveries was that Cornell University was the first (in the 1870s) to adopt an official anthem, “Far Above Cayuga’s Waters”; it is set to the 1857 tune “Annie Lisle” by H.S. Thompson.

“The first way I heard it — I haven’t been able to find it that way since — it was like ragtime piano; nothing like the orderly thing you hear today,” Herr says, listing off institutions that have used the same tune. Closer to home, he found that Francis Marion University’s alma mater is sung to a Revolutionary War tune and the College of Charleston’s is accompanied by the German national anthem.

“When I thought about the fact that our [alma mater] ought to have its own tune, I just started studying them,” Herr says. “So, I went to the library and studied them. And the more I did, the more I wanted to.”

With all that time spent researching alma maters, has Herr ever considered writing a book on the subject?

The answer is no — he’s too busy. Despite his foray into music, he’s still an active botanist. In fact, over the past few years he has developed a new, faster system for cutting plant sections for microscopic slides called the Hydro-microtome.

“It’s called that because it cuts the sections underwater,” he says. “It cuts sections the thickness of aluminum foil, which is thin enough for microscopy.”

Topics: Faculty, College of Arts and Sciences, School of Music