A skeletal marker of physiological stress might indicate good, rather than poor, health 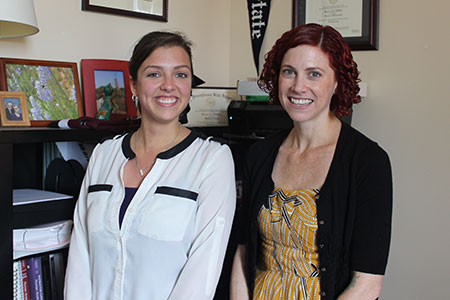 Sharon DeWitte (right), who earned her Ph.D. at Penn State, joined the University of South Carolina faculty in 2011 after five years on the faculty of SUNY-Albany. Samantha Yaussy, a Wake Forest graduate, earned her master's degree at Carolina last fall and is now pursuing a doctorate.

Biological anthropologist Sharon DeWitte studies ancient skeletons that can open a window onto the human history she hopes to illuminate. But as she and graduate student Samantha Yaussy show in a recently published study, some of the markers on the skeletons that scientists use to decipher the past might need to be looked at in a new light.

DeWitte, one of the world’s foremost experts on the Black Death, which killed one-third to one-half of Europe’s inhabitants over just seven years in a mid-1300s pandemic, is also interested in the periods before and after the Black Death, both in times of famine and, for the medieval era, relative plenty.

“This was a time when you had all of these other stressors existing, like multiple infectious diseases, people living in really crowded conditions, lack of hygiene,” DeWitte says. “I’m interested in looking at how famine might have affected subsequent patterns of health and risks of mortality.”

In research recently published in the American Journal of Physical Anthropology, Yaussy and DeWitte worked with skeletal remains excavated from London’s St. Mary Spital cemetery, which was in use from about 1120 to 1540 A.D. The cemetery was organized well enough over those years that modern-day researchers can assign burial groupings according to location to a number of shorter time periods within that larger 420-year time frame. Because they were focused on the effects of famine, the scientists specifically excluded burials from the Black Death era in the study.

The way that people were buried in plots also provided important data. Large group burials within a single grave were taken to be the result of catastrophic famine losses over short periods of time, whereas single interments were categorized as “attritional” deaths, that is, deaths in “normal” times.

Using a total of more than 1,500 individual adult remains that were almost evenly divided between famine deaths and normal deaths, DeWitte and Yaussy carefully examined the skeletons for markers that are indicative of stress during the individual’s lifetime.

One stress marker they looked for is called “linear enamel hypoplasia” (LEH), which is a horizontal groove on a tooth that results from childhood physiological stress or trauma sometime between 6 months and 6 years of age, when the tooth is forming in the jaw.

“It could be the result of an infection, lack of nutrition, or even breaking a leg,” says Yaussy. “Your enamel just stops creating itself for a day or a little longer. It starts back up again, but during that time when it was shut off, there’s no enamel on that portion of the teeth, and it leaves a groove.”

They found that that stress marker, LEH, was significantly correlated with famine. “It was a pretty sensitive indicator of famine burials,” Yaussy says. “Having that early life insult seems to instigate this pattern of lifelong frailty, so when a famine event occurs, it causes mortality in those individuals.”

Another indicator of life stress, though, turned out to be a horse of a different color. Using shin bones (tibia), the researchers looked for what’s called periosteal lesions. It’s a place on the bone where new growth on the surface has occurred in response to physical or physiological stress.

“When it’s put under stress, and it can be from something like an infection, or a break, or even just stress from carrying heavy buckets all day, bone can grow onto itself and strengthen itself,” Yaussy says. “These are nonspecific — we’re not necessarily saying that it was an infection that caused it, or that it was from someone hitting their shin repeatedly. I just see that there was bone growth there, so there’s some stressor that’s causing the bone to generate more bone.”

In contrast to people with the LEH indicator, individuals with areas of bone regrowth were correlated with periods of normal, or attritional, death. That result came as a something of a surprise to colleagues in the field.

“This project was a bit of a shock to some of the people at the paleopathology meetings where we presented it,” Yaussy says. “A lot of people have been thinking that things like periosteal lesions are bad, that people who had them weren’t especially healthy. But this study in part might be saying that those people were actually pretty healthy. It takes time, a couple of weeks, to build up this bone, so it could be that if there was some stress event that was substantial enough to kill a person before they could even register a response, we wouldn’t be seeing it on the bone now.”

The unexpected result helps inform DeWitte in the larger goal of looking at what happens to populations after crises, such as the Black Death or famines, pass, and particularly how cultural norms might influence the outcomes.

“What I’m interested in going forward is looking at access to resources before the Black Death, during normal conditions during famine conditions, and then after the Black Death, again during normal and famine conditions,” Dewitte says. “Seeing if there were social factors that affected people’s access to resources when there was little available and then when they became abundant again.”

“I think this might have implications for living populations, understanding how social, economic and political factors affect access to resources beyond the actual amount of resources that are available.”

DeWitte and Yaussy’s research study with collaborator Rebecca Redfern of the Museum of London was recently published in the American Journal of Physical Anthropology.