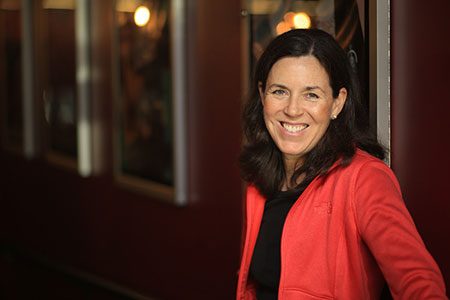 “My mother was a real film buff. She taught me everything. She knew the names of the stars, the directors and the movies they made. Once, she took me out of elementary school so I could go to a Shakespeare Film Festival. I watched Laurence Olivier’s ‘Henry V’ and Orson Welles' ‘Macbeth.’ It taught me to love Shakespeare, but movies even more.” — Julie Hubbert, music historian, School of Music

This summer, Julie Hubbert is headed to Hollywood. But she won’t be stalking the likes of Leonardo DiCaprio or Jennifer Lawrence. A recipient of a National Endowment of Humanities Summer Stipend and a music historian in the School of Music, Hubbert will busy her days in Tinsel Town combing the documents of legendary filmmakers from the New Hollywood era, also dubbed the American New Wave.

The movie industry experienced tremendous change in the late 1960s and early 1970s, explains Hubbert. “The studio model was collapsing, box office revenue was declining and a new generation of filmmakers that included Stanley Kubrick, George Lucas, Robert Altman and Martin Scorsese and others were rising to prominence.”

Taking cues from their European counterparts, these mavericks broke with convention and employed experimental storytelling and new visual techniques in the construction of their movies, many of which are considered Hollywood classics today. “2001: A Space Odyssey,” “American Graffiti,” “The Graduate” and “Easy Rider” are among the most notable.

New Hollywood films have long been critiqued and analyzed for their visual aesthetics, but until fairly recently, few researchers have studied the music in these films. Hubbert is one of the few music historians to delve into the topic. “The study of film music from my perspective — that is as a music historian — is very recent,” she says. “Even as recently as five or 10 years ago, very few in film studies were researching music because they didn’t feel trained, and very few in music history were researching film music because most music historians thought film was frivolous.”

Advancements in film technology — mainly digital reproductions and access to archival material — has accelerated the research and made it easier to piece together the production histories of films, particularly the development of the soundtracks.

Hubbert is particularly interested in the use and placement of pre-existing music in film soundtracks. Many films in the New Hollywood period used compilation soundtracks instead of newly composed scores. Kubrick’s “2001” A Space Odyssey,” Hubbert notes, is a most famous example. “Composer Alex North wrote a score for it, but Kubrick rejected it in favor of pre-existing music, Richard Strauss’ tone poem, ‘Also Sprach Zarathustra,’ most notably.

“Kubrick’s wife heard some interesting pieces on the radio — new compositions by the Hungarian composer Gyorgy Ligeti and suggested he use them,” adds Hubbert. Kubrick wrote the radio station to get the tapes, and he ended up repurposing some of Legeti’s pieces in the film soundtrack, too. He didn’t give the composer credit or pay for the music until well after the film was released.

A classically trained pianist, Hubbert studied at the University of Southern California and the Manhattan School of Music. After getting her master’s degree, she considered earning a doctorate in music performance followed by a career in teaching and performing. Instead, Hubbert detoured into music history and earned a doctorate at Yale where she wrote a dissertation on the 19th century German composer Gustav Mahler. But it was passion for movies — first fueled by her mother — that pointed her to her current research.

“My mother was a real film buff,” Hubbert says. “She taught me everything. She knew the names of the stars, the directors and the movies they made. Once, she took me out of elementary school so I could go to a Shakespeare Film Festival. I watched Laurence Olivier’s ‘Henry V’ and Orson Welles' ‘Macbeth.’ It taught me to love Shakespeare, but movies even more.”

At Carolina, Hubbert teaches music history to undergraduate and graduate students and studies film history as well as film and audio production. Her Los Angeles residency will take her to the Margaret Herrick Library at the Academy of Motion Picture Arts and Sciences, the Louis B. Mayer Library at the American Film Institute and the Warner Brothers Archive at the University of Southern California to complete primary research on “The Auteur as Audiophile: Music in New Hollywood Films,” her current book project.

“These collections contain extensive production notes for many films of this period that outline the aesthetic and practical choices directors and sound personnel made for the inclusion of music in these films,” explains Hubbert.

In addition, “The Auteur as Audiophile” will focus on the influence of the “high fidelity” movement of the 1950s and 1960s on the film soundtrack the advent of magnetic tape technology that introduced new editing and layering techniques like splicing and multitracking. She also will look at how labor unions and their control of recorded music had an effect on the content of movie soundtracks.