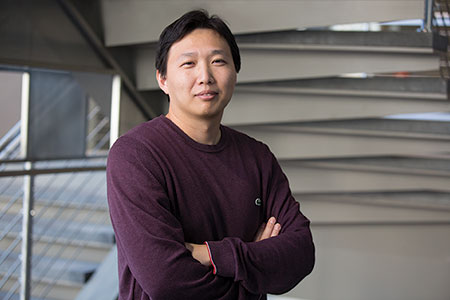 Miao Yu, who earned his doctorate from the University of Colorado at Boulder and joined the Carolina faculty in 2012, was named a 2016 Breakthrough Star.

College of Engineering and Computing faculty member Miao Yu might focus on the ultra-thin in his research, but his record of accomplishment at the University of South Carolina is nothing of the sort.

Since arriving at the university in 2012, he has garnered more than $2.5 million in research funding, including an NSF Early Career Development award. An assistant professor in the department of chemical engineering in the College of Engineering and Computing, Yu prepares and studies coatings and membranes of almost vanishing thickness.

Yu has developed a method of preparing extremely thin membranes made of an overlapping mosaic of graphene oxide flakes, for example. His research team is able to synthesize a membrane with an average thickness of just 1.8 nanometers, which is only slightly thicker than two carbon atoms. The membrane can work as a molecular sieve, permitting small gas molecules, such as hydrogen, to pass through unimpeded while larger ones, such as carbon dioxide, cannot. The work was published in the journal Science just a year after Yu joined the Carolina faculty.

In addition to media notice, his research has attracted commercial interest as well. A startup company based in the United Kingdom has licensed patents on membranes prepared in his laboratory, which it terms a transformative technology for water purification and environmental remediation.

Industry-standard polymer membranes will soon be rendered obsolete by inorganic membranes Yu is developing, says John Regalbuto, Smartstate Endowed Chair and Director of the Center for Catalysis for Renewable Fuels, who calls the technology a “truly disruptive innovation.”