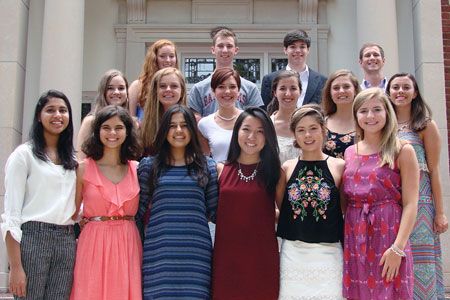 “We were looking for schools with a culture of excellence, and the Honors College at USC is clearly one of those. Our confidence in the professors and administrators there has been justified over and over, and the kids there are simply amazing.” — Roe Stamps, founder of the Stamps Family Charitable Foundation

For today’s college students, a big part of their education happens outside the classroom, in the “real world.” But finding the time — and sometimes, more importantly, the money — for such real-world experiences can be difficult.

Now USC’s best and brightest students have that opportunity thanks to the Stamps Carolina Scholars program. Supported by the Stamps Family Charitable Foundation, the program provides $10,000 annual scholarships and other benefits for 20 Carolina Scholars for four years and provides up to $8,000 in additional money over the course of an undergraduate career for students to pursue these beyond-the-classroom experiences, such as studying abroad or in Washington, D.C.

“During the spring break of my freshman year, I had the opportunity to volunteer in Belize with the Honors College,” says sophomore Stamps Carolina Scholar Habiba Fayyaz of Columbia. “While there, I served as a student volunteer in free medical clinics, which allowed me to directly interact with patients, practice basic diagnostic procedures and shadow local physicians.”

A biology major, Fayyaz plans to go to medical school after gradu-ation.

“This upcoming spring break, I will be participating in a similar medical mission trip to Panama with the Office of Pre-Professional Advising,” he says. “I would not have been able to partake in such an enriching experience without the Stamps program.”

The family behind the scholarship — Penny and Roe Stamps — have similar programs at other universities and sought out a partnership with USC four years ago.

“We were looking for schools with a culture of excellence, and the Honors College at USC is clearly one of those,” says foundation founder Roe Stamps, a graduate of Georgia Tech and Harvard who created his family’s foundation after successful careers in engineering and investing. “Our confidence in the professors and administrators there has been justified over and over, and the kids there are simply amazing.”

One of those kids is 20-year-old international business and finance major Philip Richardson.

“The Stamps enrichment fund allowed me to study in France during the summer of my freshman year,” says Richardson, who also spent the 2016 spring semester studying in Washington, D.C. “I plan to use the rest of the fund for future summer internship  and research experiences.”

That is exactly what Roe Stamps and his family were looking for when they founded their national scholarship program 15 years ago.

“We became convinced that we had the opportunity to improve the likely trajectory of many lives and careers, so we advanced to partnering with over 40 great universities, including Carolina, and to the more than 700 students we are working with this year,” Stamps says. “Clearly many of these young men and women were already likely to accomplish a great deal, but with a little boost from us and our partner schools, we think they will do even more.”

Stamps says his foundation can help as many as 5,000 students.

“That’s a pretty good number, but think of the lives they will, in turn, affect,” he says. “That’s where we will make a difference. I’ve told a lot of people that what we are doing has clearly been fun and interesting — but my instincts say that it may well be important for the society we live in.”