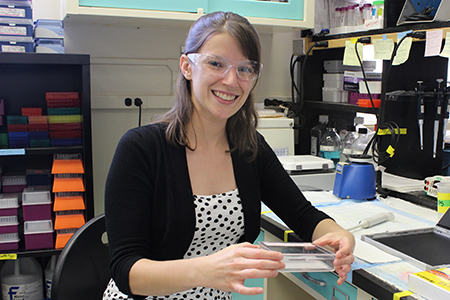 Allison Manuel was awarded a three-year pre-doctoral fellowship from the NIH for her graduate work at the University of South Carolina.

Working in Norma Frizzell’s laboratory in the School of Medicine, doctoral student Allison Manuel is getting down to brass tacks with a chronic disease that afflicts some 30 million Americans. Her research is resolving details of a detrimental cellular consequence of diabetes that was discovered here at the University of South Carolina: a protein modification that can overwhelm a cell’s ability to function properly.

Having high blood sugar can, over time, cause a host of seemingly unrelated health issues, from glaucoma to nerve damage to kidney disease. The protein modification Manuel is studying defines a concrete cellular result of excessive glucose, with the hope being that scientists can eventually trace its propagation all the way downstream to an observable affliction, such as kidney disease. Understanding how the disease process works is the first step toward developing a treatment to prevent it.

The modification, called succination, was first uncovered in fat cells, or adipocytes, in the laboratory of John Baynes, a professor in the chemistry and biochemistry department, while Frizzell was a post-doctoral fellow in the lab in 2004. A succinated protein has a small attachment compared with one in its original state. A cysteine residue in the protein is modified by fumarate, a product of glucose metabolism.

Frizzell, now a faculty member at the School of Medicine, worked with Baynes to understand why concentrations of fumarate, a by-product of the ATP-producing Krebs cycle, increase in fat cells in diabetes. Given that diabetes throws glucose metabolism into disarray, it’s not surprising that fumarate might build up to high levels when the disease strikes.

“The constant state of hyperglycemia you have in diabetes causes increased ATP levels and mitochondrial stress that essentially back up the entire system, leading to an increase in fumarate,” Manuel says.

The research team also uncovered a place in the body where the modification was highly prevalent: body fat.

“They found that, in the obese and diabetic state, this modification significantly increases in the adipose tissue when compared to healthy conditions,” Manuel says. “We did not observe these increases in any other tissue in the body in the diabetic state.”

When Manuel joined the team as a graduate student in 2012, after earning a bachelor’s degree in exercise science from the Arnold School of Public Health, her goal was to establish whether the modification might be harmful to the normal function of a particular kind of protein.

The loss of one cell isn’t a local event, she adds. Consequences spread throughout the tissue. And although body fat is the object of scorn for most people, that’s not the case for biomedical researchers.

“When there is adipocyte cell death, there’s a release of inflammatory markers,” Manuel says. “That’s one of the reasons we have a chronic state of inflammation in adipose tissue in the diabetic state. However, maintaining healthy adipose tissue is very important. It secretes several hormones that influence the skeletal muscle, the brain, the liver and many other tissues.”