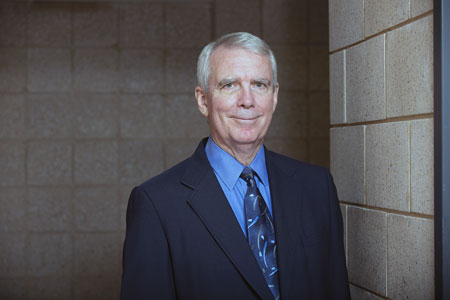 "One thing I have learned over the past 15-20 years is just how important good leadership is. Leadership is more than a buzzword.” — Dan Reger, distinguished professor emeritus, chemistry and biochemistry; 2016 Breakthrough Leadership Award winner

Dan Reger, a distinguished professor emeritus in the University of South Carolina’s department of chemistry and biochemistry, has published 225 papers to-date, won a slew of awards for teaching, research and service, and continues to produce pioneering research in the field of phase catalysis for homogeneous transition metal systems.

None of that happened in a vacuum, however. Reger is quick to acknowledge his peers and tips his hat to a history of quality leadership in his department “dating back to at least the 1950s,” which has helped make his own accomplishments possible.

“People think as you get older that you learn lots of things,” says Reger, who won a 2016 Breakthrough Leadership Award earlier this year. “It’s not true in a lot of ways, but one thing I have learned over the past 15-20 years is just how important good leadership is. Leadership is more than a buzzword.”

Reger’s own leadership is perhaps best evidenced by the number of National Science Foundation EPSCoR grants he has helped secure for his department over the past 25 years — and for the effect those grants have had on the department’s reputation and diversity.

Through one of those grants, the department hired its first female tenure-track professor in the early 1990s. That professor, Catherine Murphy, would spend 16 years as Reger’s colleague before accepting a position at the University of Illinois. She would also go on to be elected to the National Academy of Sciences — largely for research done while at Carolina.

“Cathy Murphy was unbelievably successful here,” says Reger. “We started our mentoring program the same year we hired her, and I was her mentor. We couldn’t have a female mentor because there weren’t any — we didn’t have any. That’s changed. And that’s why we’re now able to keep adding high-quality women faculty.”

Thanks to additional EPSCoR grants, Carolina’s chemistry department can now claim nine female tenured or tenure-track faculty members, placing it in the top 10 percent of chemistry programs nationally in terms of gender diversity.

Reger is equally proud to have helped mentor the next generation of inorganic chemists as a dissertation director.

“If you ask what I’m proudest of, it’s the fact that I’ve had 35 students start the Ph.D., and 33 now have Ph.D.s,” he says. “One has a master’s; one didn’t make it. Those people are now out there in the world — working for companies, teaching, doing their own research.”