The fastest-growing tourist destinations in the world are in Asia, the Pacific and the Americas. The country that draws the most tourists overall is France.

But when it comes to studying tourism and hospitality, the United States — which ranks No. 2 globally in the number of visitors it attracts and No. 1 in the amount of money spent, according to the U.N. — still comes out on top. With its combination of top-tier tourist destinations, fully developed hospitality infrastructure and world-class educational institutions, students come from throughout the world to study the industry in the United States. 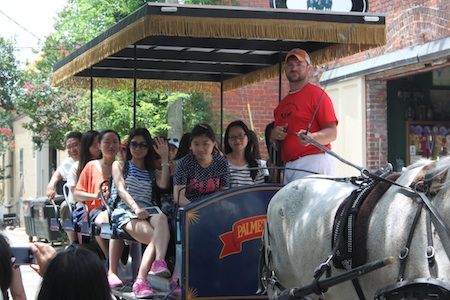 Students studying in the three-week International Hospitality and Tourism Academy will visit Charleston (pictured) and Orlando. A reception welcoming the students will be held June 27 at 3:30 p.m. at the Darla Moore School of Business.

Enter the University of South Carolina’s International Hospitality and Tourism Academy, a three-week summer program starting June 27 that welcomes foreign students for intensive training in hospitality and tourism management. Now in its third year, the International Hospitality and Tourism Academy is bringing 35 students from such places as China, Hong Kong, Macau, South Korea and Colombia. The students will be welcomed with a reception at the Darla Moore School of Business, Room 113, at 3:30 p.m. on Monday, June 27.

Most participants will have just completed their first or second year in a tourism or hospitality program in their home country. “They want to go out to see the world — to see how lessons are taught here and how hotels and clubs are operated here in the United States,” says international program coordinator Lin Wang, who organized the course.

The university also offers proximity to Charleston, which has been ranked the No. 1 small U.S. city destination by readers of Conde Nast Traveler for the past five years.

Training students is one goal of the summer program; another is raising awareness of the university’s hotel, restaurant and tourism management degree programs. “Once the students know about us, they may apply to our program in the future,” Wang says.

There’s a plan in place for that, too. The college is launching a one-plus-three program in which students from foreign countries will study for one year at their home institutions and then come to the University of South Carolina for the next three years. In August, 27 students from China are coming to study in the new program — the largest of its kind at the university, Turk says.

Tourism growth in Asia and the Pacific has reached the level that many of the top hotels in the world are in that region, Turk says. But there is still a lot to learn by Chinese students coming to the United States, Turk and Wang agree.

As just one example, they point out that the whole idea of private clubs is a relatively new, niche phenomenon in China, whereas there is a long history of such clubs in the United States. “The Chinese don’t have the kind of accumulation of knowledge over time in this industry — they are still opening up to the world, and then they are coming straight to the U.S. to get the best education they can get,” Turk says.

There are other differences, too. In China, Wang says, there is an emphasis on “trying to give you a feeling that you are honored, that you are being served at all times,” an emphasis that is not only cultural but also stems from low labor costs. The education systems are different, too, “so they want to learn what we offer to our students here,” he adds.

Tourism has proven to be a robust sector of the economy in recent years. In 2014, 46 million people traveled overseas, according to the United Nations, an increase of 4.3 percent over the previous year and the fifth straight year of strong growth. Travel and tourism supports more jobs than financial services, education and banking in every region in the world, according to the World Travel and Tourism Council.

In an industry that is growing and globalized, Turk notes that the College of Hospitality, Retail and Sport Management’s offerings for international students will not only benefit students from overseas, but also those born and raised in the United States.

Tourism is a global industry by its very nature, Turk emphasizes.

“This is more of an opening up to the outside world — making sure that students and faculty understand that growth is happening and development is happening outside our borders,” he says. “We are living in a global environment, and you never know where the career of a student is going to take them.”