Research leadership by the numbers

Ralph White’s story could be told in numbers: 328 journal papers, 89 graduate students who completed their degrees under his tutelage, five years as dean of the College of Engineering and Computing.

Or it could be told in international honors: White is only the second scientist ever to receive the Olin Palladium Award and the Vittorio de Nora Award, both from the Electrochemical Society. He’s also a fellow in the Electrochemical Society, the American Institute for Chemical Engineers and the American Association for the Advancement of Science. 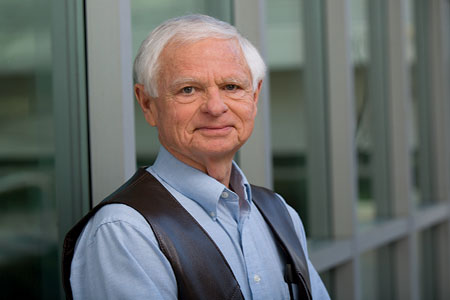 Ralph White, a chemical engineering professor who joined the College of Engineering and Computing faculty in 1993, is one of six faculty members recognized by the Office of Research with the 2016 Leadership in Research Award.

It’s likely the Office of Research considered all of those accomplishments and more from his 23 years at USC in naming him a 2016 recipient of its Leadership in Research Award.

White came to Carolina as a seasoned scientist and educator and immediately established a nationally and internationally known research program in electrochemistry. “I have really been blessed with truly outstanding graduate students,” says White, citing several who have become prominent scientists in their own right. As chair of the chemical engineering department, one of White’s first hires was Michael Amiridis, who went on to become chair of the department, dean of the college after White’s term ended and, later, Carolina’s provost before becoming chancellor of the University of Illinois at Chicago.

Another of his hires was James Ritter, now the L.M. Weisiger Professor Engineering and a Carolina Distinguished Professor. “We went from being very near the bottom of 103 Ph.D.-granting chemical engineering departments in the U.S. to being ranked No. 29 in the country,” Ritter says. “Ralph set the standard very quickly and the bar very high for his young faculty, and we all strived to meet his mark.

“He worked tirelessly with us to create a working environment that was fun and rewarding. He made us all feel like graduate students again.”

Industry leaders have high praise for White, as well. “My personal view is that Prof. White is the most sought-after consultant and collaborator by those working on electrochemical energy storage devices within the automotive community,” says General Motors’ Mark Vergrugge, a member of the National Academy of Engineering.

Jim Trainham, a former vice president for research at DuPont, added one more number in describing White’s contributions through his publications and consulting work: “I know and work with many academic and industrial leaders in our discipline. Through these relationships I can readily identify those few who are truly special, contributing unique value. Dr. White is one of these very rare individuals.”