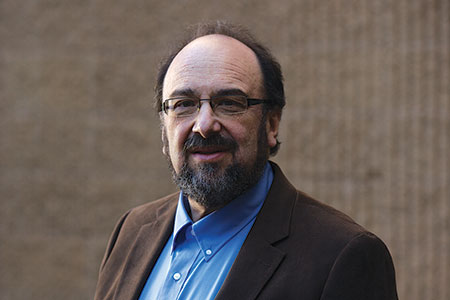 Igor Roninson, the SmartState Endowed Chair in Translational Cancer Therapeutics and director of the Center for Targeted Therapeutics, has won an $11.3 million research grant from the National Institutes of Health.

Igor Roninson brought 10 scientists and Senex Biotechnology, a cancer drug discovery company, to the University of South Carolina in 2011 when he was named the new SmartState Endowed Chair in Translational Cancer Therapeutics. But the South Carolina College of Pharmacy professor, who was named a Breakthrough Leadership in Research awardee by the Office of the Vice President for Research, was just getting started in building infrastructure that would enhance cancer research throughout the state.

Just three years after his arrival, Roninson’s leadership bore the fruit of one of the largest grants the university had ever received — $11.3 million from the National Institutes of Health for a Center of Biomedical Research Excellence. As director of the Center for Targeted Therapeutics, Roninson is able to extend his reach in developing young talent that will elevate the Carolina’s reputation as a center for drug discovery research nationally and internationally.

“His scientific contributions to the field of cancer research over the years are exhaustive, have had great impact, and are published in the top journals in his field,” says Kim Creek, chair of the Department of Drug Discovery and Biomedical Sciences. “And he is not only a top-class scientist, but also a tireless leader and mentor of junior scientists and junior faculty.”

When he moved in 2011 from Albany, N.Y., where he was director of the Cancer Center at Ordway Research Institute and served as a faculty member at Albany Medical College, Rensselaer Polytechnic Institute and the State University of New York at Albany, Igor Roninson brought major equipment and expert colleagues that allowed them to set up the Microscopy and Flow Cytometry Facilities, a core resource located in the Coker Life Sciences building. They also laid the foundation for the Functional Genomics Core.

Since Roninson’s arrival in South Carolina, his company, Senex Biotechnology, has discovered a first-in-class cancer drug that acts through an entirely novel mechanism and has applications in cardiovascular and viral diseases. Senex has brought more than $3 million into the South Carolina economy through NIH Small Business Innovation Research Grants, private investment and licensing fees.