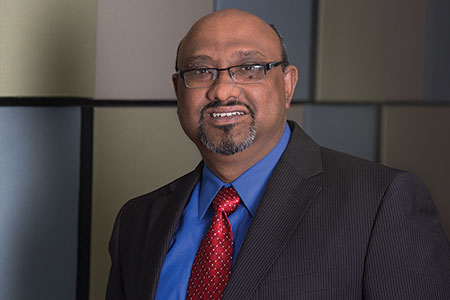 Saurabh Chatterjee joined the faculty of the Arnold School of Public Health in 2012. He completed doctoral studies at the University of Mumbai and held postdoctoral positions at the Duke University Medical Center in Durham, N.C., and at the National Institute of Environmental Health Sciences in Research Triangle Park, N.C.

Drinking too much alcohol is a well-known pathway to liver disease, but even teetotalers aren’t immune to cirrhosis — particularly if they have a weight problem. Saurabh Chatterjee’s Environmental Health and Disease Laboratory has shown how obesity elevates health risks toward a contaminant that is common in the developed world’s water supply. The result can be a liver that looks a lot like that of a long-term alcoholic.

Discovering that a low-level byproduct of a common method of municipal water treatment in the U.S., bromodichloromethane, elevates health risks for the obese is just one step forward in a more general search for Chatterjee, who was honored as a 2016 Breakthrough Star by the Office of the Vice President for Research. An assistant professor in the Department of Environmental Health Sciences in the Arnold School of Public Health, Chatterjee is guiding his laboratory toward an understanding of how environmental contaminants — agents in the common built environment of the modern world that are at such low concentrations as to often be termed “nonhazardous” — might work in concert with obesity to create health risks never before documented.

“As a scientist, my goal remains to define the role of environmental contaminants in the development of metabolic syndrome, the pathological consequences resulting from obesity and lifestyle changes,” says Chatterjee, who is an NIH Pathway to Independence grant awardee. “It is a major public health challenge.”

Saurabh Chatterjee’s Environmental Health and Disease Laboratory has earned national recognition in immunotoxicology and liver disease research, with awards from both Society of Toxicology and American Association for the Study of Liver Diseases.

Two of Chatterjee’s doctoral students, Suvarthi Das and Diptadip Dattaroy, have also been recognized by the vice president for research, being named Breakthrough Graduate Scholars in 2015 and 2016, respectively.