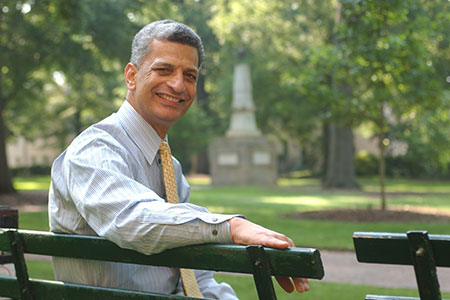 Center for Predictive Maintenance director Abdel Bayoumi came to USC in 1998 to chair the Department of Mechanical Engineering and lead what was then called the Condition-Based Maintenance program.

One of USC’s most successful home-grown research programs has a new name, a new commercial partner and will soon move to a new building with ten times the floor space it currently occupies.

The College of Engineering and Computing’s Condition-Based Maintenance (CBM) program is now the Center for Predictive Maintenance (CPM), and the research group will move into a newly renovated, 30,000-square-foot space on Catawba Street late next spring. The facility upgrade will accommodate a dramatically expanded mission for the center.

Moving from the CBM’s early focus on developing cutting-edge military helicopter maintenance protocols, the CPM will now offer training and education in general machinery (such as aerospace, aviation, automotive and heavy industries), the petroleum and petrochemical industries (including gas, oil, chemical refining and nuclear power) and water resources industries.

Center director Abdel Bayoumi, who came to USC to chair the Department of Mechanical Engineering and direct the newly organized CBM program in 1998, says the earlier incarnation of the center was focused on refining what has proven to be a highly effective tool.

Working closely with the S.C. Army National Guard, Bayoumi’s team has, in the past 18 years, developed a health-monitoring system for helicopters that now saves the U.S. Army millions of dollars every year. By installing sensors at critical junctures in an AH-64 Apache airframe and analyzing data in an advanced tail rotor drivetrain test facility, the research group developed insights into the aircraft’s mechanical operation that the Army was unaware of.

USC engineers have refined their insights into a more general condition-based approach to maintenance, one that they’ve applied to other rotorcraft in the Army’s fleet, as well. Their approach focuses on monitoring and replacing parts when needed, rather than on a rigid schedule that sometimes calls for removing parts with significant service life remaining, and which might also fail to replace parts on the verge of premature failure. Bayoumi cites military researchers who confirm that soldiers’ lives have been saved because of USC’s innovations in the field.

The CBM program has the highest return on investment, 20:1, of any Army-funded project, he adds. And he believes one key to the program’s success is the close relationship between the researchers and the people who benefit the most from their work.

“What made it successful is that when you get results, you can share it immediately with the crew chief, the maintenance team, and the pilot,” Bayoumi says. “Then they implement it and can come right back and say, ‘Yeah, we’re happy with this.’”

That’s the kind of ground-up approach that the new center plans to spread into new industries.

“Condition-based maintenance was a tool, and predictive maintenance is a culture,” Bayoumi says. “That culture will encapsulate a value-added, cost-benefit analysis, and we have the experience to assess it.”

Aviation, aerospace, automotive and similar general machinery industries involve innumerable gears, bearings and shafts that are still being replaced on costly time-based schedules. Petroleum, refining, chemical processing, energy and related industries rely on control valves throughout their facilities, all of which stand to gain from health monitoring to reduce down-time and replacement costs.

And the water purification and desalination industries are experiencing enormous current growth worldwide with even more expected in the future, Bayoumi says, and they involve pumps and valves for which predictive maintenance should prove highly beneficial.

University partner IBM is part of the mix, as well. The computing giant is providing software that will organize the prodigious quantities of data collected by multiple sensors and help researchers develop predictive maintenance algorithms that allow factories and operations to work at peak efficiency.

When the new facility opens, the research team will have the demonstration and classroom space to provide training, certifications and short courses needed to help propagate the know-how — the predictive maintenance culture — that the CPM has developed over time. And they have a lot to offer.

“This is totally unique,” Bayoumi says. “There is no other program like this one in the United States.”