With South Carolina still recovering from last October’s historic floods, it might seem incongruous to study drought. But geographers with the university’s Carolinas Integrated Sciences and Assessment team take the long view. They know this state has faced serious drought in the past — and will again. Already this summer, several areas in the Upstate are experiencing moderate or severe drought, according to the U.S. Drought Monitor.

Geographer Greg Carbone and colleagues are developing an online drought atlas to help improve understanding of drought in the Carolinas.

Recently, USC geographers Greg Carbone, Kirstin Dow and other colleagues have been developing an online drought atlas that will offer tools to help people understand drought within the context of changes over time as well as changes in specific regions. (When completed, the atlas will be at the Carolinas Integrated Sciences and Assessment website.)

“We have been interested in the spatial and temporal representation of drought, so we have found ways to map it and ways to statistically summarize it,” says Carbone, whose research focuses on climate variability and drought monitoring in the Carolinas. “Sometimes you might want to see, ‘What does this drought we are in look like in comparison to the past?’ Given the events in the fall with heavy precipitation, we became interested in extremes of the other sort.”

The atlas won’t all be charts and graphs, though. Carbone and Dow are dedicated to telling the human stories of drought, too — the horticulturalist who has to revamp a water system to respond to a drought; the car wash owner who might have to shut down in the event of water restrictions; or the water manager who actually wants a dry summer so his treatment facility’s profits stay up. Toward that end, the site will also feature photos and video interviews.

“It should be quite visual,” Carbone says, “and it will try to interweave the drought story for the Carolinas as best we can.” 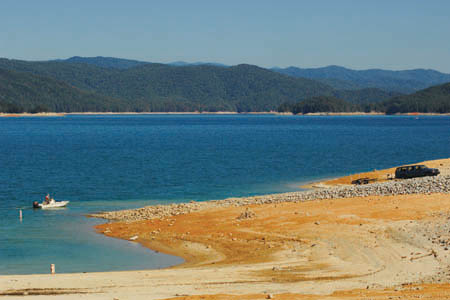 Researchers from throughout the Carolinas will converge Sept. 12-14 in Charlotte for a conference, Flooding, Drought and Extreme Heat: 2016 Carolinas Climate Resilience Conference. The goal is to help communities build their capacity for climate resilience. (Photo courtesy SC Wildlife magazine)

South Carolina experienced a major drought between 1998 and 2002, with water levels in streams, lakes and the ground at or below record lows; another significant drought hit in 2007-08. Carbone emphasizes that as devastating as the effects of drought can be, those effects are not uniform: Drought affects different people in different ways.

When you think of drought, you might picture crops withering in a field or dry, baked soil cracking under intense sunlight. Strictly speaking, though, it’s not heat that defines drought conditions — it’s “a period of drier-than-normal conditions that results in water-related problems,” according to the U.S. Geological Survey.

Heat and drought are nonetheless closely related, because heat increases the rate of evaporation. Given a steady rate of precipitation, conditions will be drier when temperatures are increasing because more water will be lost to evaporation. That’s important, because scientists predict increasing temperatures.

The challenge is putting those heat projections together with precipitation models, which vary widely — “from a little drier to considerably wetter,” Carbone says — and figuring out what it all means in terms of water availability once you take evaporation into account.

Carbone has done the math. The answer, he says, is that about two-thirds of the models will suggest drier conditions. His answer, though, raises another question: “Is two-thirds enough to make conclusions?” he asks. “That is the challenge.”