When Gene Crawford was a student at University of South Carolina in the early ’90s, he knew exactly what he wanted to do — but the university wasn’t entirely ready for him to do it. 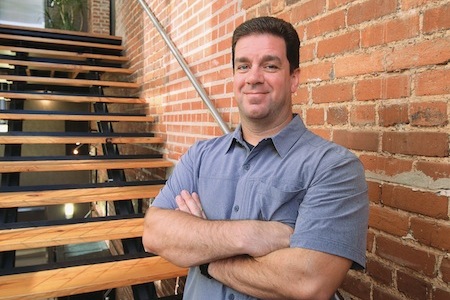 Gene Crawford, a 1996 graduate of what was then the art department, has carved his own path in the field of web design.

Crawford wanted to be a graphic designer; he’d developed a love for design in high school. At the time, though, the field was just starting to come to grips with the power of computers. Graphic design, offered as a concentration in the art department, was the odd man out in a department full of aspiring painters, sculptors, art teachers and art historians.

“When I went into the program, my first couple of classes were using traditional hand tools — X-Acto knives, wax markup machines, rubylith, wash and ink,” the 41-year-old Berkeley County native recalls. “If there was an illustration, you did it yourself.”

At the time, it made sense, “because the things you learned in printmaking and painting and critique directly applied to the work you were doing,” Crawford says. “But during those four years there was this question coming up, ‘Well, what do we do with the computer?’ ”

Back then, there wasn’t a good answer. A lot has changed today — even the name of the school itself, from the Department of Art to the School of Visual Art and Design.

“Now if you are a graphic design student, they say you have to have a Macbook, you have to get Photoshop, you have to have these tools,” Crawford says. “When I was in, the computer was just another tool — they treated it like using an X-Acto knife or an airbrush. They didn’t know what to do with it.”

“... during those four years there was this question coming up, ‘Well, what do we do with the computer?’”

Twenty years later — he graduated in 1996 — Crawford’s career has been defined by the computer. And he has had a big role in helping others find their way in an internet-driven world, too. In addition to launching his own web design firm, Period Three, in 2003, he and fellow Carolina alum Jay Barry produce web conferences throughout the country through their design platform Unmatched Style.

Locally, the conference is branded as ConvergeSE; this year’s conference — which draws hundreds of young, tech-savvy attendees — was held at USC’s new Alumni Center. More recently, Crawford and several partners have launched SOCO, a co-working space in the Vista that recently opened a second location on Columbia’s Bull Street property, as well as Iron Yard Columbia, a code school.

None of this could have happened without Crawford’s experiences at Carolina. Even though the graphic design program wasn’t moving as quickly in the direction of digital and web design as Crawford would have hoped, he found a way to immerse himself in the emerging technologies anyway.

“I sort of engineered that part,” he says. “My last two years were basically independent studies.”

Part of that, he says, was working for the university’s Student Media office. In that role, he worked on all kinds of graphic design projects, as well as on an early version of The Daily Gamecock website.

Combined with what he learned in his art classes, Crawford’s experience with Student Media helped prepare him for the rapidly changing workforce he was about to enter. “Doing the student media stuff — the newspaper, the student magazines, that schedule — it all really gave me a leg up,” Crawford says. “Newspaper design is super important when it comes to the early days of the web, because the layout was really similar; designers crossed mediums back then.”

Upon graduation, Crawford was hired by a collegiate screenprinting company in Irmo. It was essentially an art director job right out of the gate. Two decades after entering a rapidly changing workforce himself, Crawford is now helping prepare others to enter the still-growing field of web design. While ConvergeSE conferences present the most up-to-date trends and training for those who are already professional web designers, another effort Crawford has partnered on locally — Iron Yard Columbia, a partnership with the Greenville-based Iron Yard code school — helps broaden the local workforce for web-based jobs.

The code school offers short-term programs in design, data science, back- and front-end engineering, and mobile engineering. Crawford sees Iron Yard Columbia as serving a role that complements that of the university; its students are often career switchers looking to get their foot in the door.

“Iron Yard is anybody,” says Crawford, a father of two who married his high-school sweetheart. “One guy was a plumber, one was a park ranger, one guy worked at Chili’s. But they want to get into our industry. So we take essentially raw material and turn them into industry professionals. It’s pretty damn rewarding.”

From finding his own way into a then-emerging industry, Crawford has come full circle, offering others a chance to find their way, too.