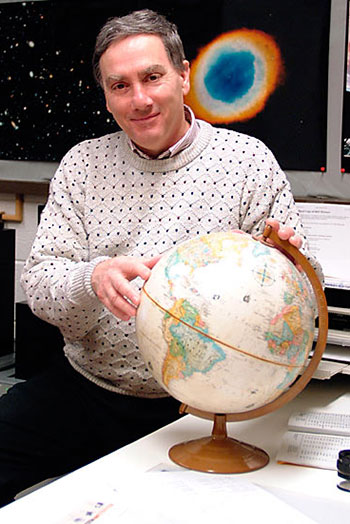 Astrophysicist and best-selling author Mario Livio will present two talks on campus. The colloquium “Our Place in the Cosmos” is at 3:30 p.m., Wednesday (Sept. 7), in the program room of the Ernest F. Hollings Special Collections Library. The public lecture “Brilliant Blunders: From Darwin to Einstein” is at 7 p.m., Thursday (Sept. 8) in the law school auditorium. (Photo copyright Mario Livio.)

The organizers of the new Distinguished Lecture Series in Physics and Astronomy were looking for a popularly accessible scientist to inaugurate the program this fall, and they found the perfect speaker in Mario Livio.

An accomplished astrophysicist who worked for 24 years with the Hubble Space Telescope through the Space Telescope Science Institute in Baltimore, Md., Livio has published more than 400 scientific papers. But he is also a popular nonfiction writer, with five best-selling books to his name, who has appeared on programs including "60 Minutes," "All Things Considered" and "The Daily Show."

Starting with "The Accelerating Universe" in 2000, Livio has published a book intended for general audiences every few years since, including "The Golden Ratio," "The Equation That Couldn’t Be Solved" and "Is God a Mathematician?"

His most recent, "Brilliant Blunders: From Darwin to Einstein," was selected by the Washington Post as one of the Notable Books of 2013 and is the subject of his public lecture at 7 p.m., Thursday (Sept. 8) in the law school auditorium.

In his talk, intended for a broad public audience, Livio will consider major errors by the likes of Charles Darwin and Albert Einstein that he says were nevertheless part and parcel of scientific progress.

“All of these blunders related to evolution: Of life, of the Earth, of stars and of the universe as a whole,” Livio writes. “The key point is that mistakes in any discipline that is based on creative thinking and innovation are not only inevitable, they are an essential part of progress. If not for blunders, we would be traveling for too long down too many blind alleys.”

Livio will also present a colloquium, “Our Place in the Cosmos,” at 3:30 p.m., Wednesday (Sept. 7) in the program room of the Ernest F. Hollings Special Collections Library. In that talk, intended for a broad university audience, he will review the status of the physical existence of life on Earth in view of the latest findings in astronomy, cosmology and particle physics.