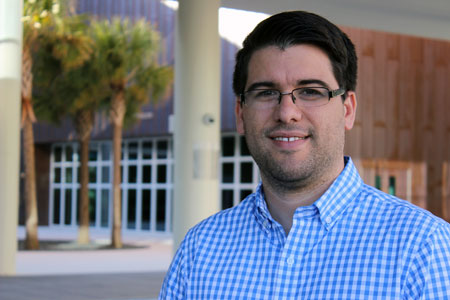 "A lot of people in the developing world, even though they are very poor, have access to cell phones, and I’m looking at how that very rapid expansion over the past decade or so has actually improved not only economic development, but also things like transparency and governance." — Robert Gonzalez, economics professor

What’s your hometown? I was born in Havana and lived in Cuba until I was 16, but I would say that Miami is my hometown. Miami is a special place for a lot of Cuban immigrants, because although you were born in Cuba, that country didn’t give you the opportunities that this country gave you. My wife and I are very proud of being here now, and we’re very proud to be from a city, Miami, that has a very Cuban flavor.

What’s your area of research? I’m a development economist, and within development, I’m working on mostly corruption topics, the economics of corruption. And more recently on the impact of information communications technologies in improving transparency and governance. For example, cell phone technology has been a very successful story in the developing world. A lot of people in the developing world, even though they are very poor, have access to cell phones, and I’m looking at how that very rapid expansion over the past decade or so has actually improved not only economic development, but also things like transparency and governance.

What are you most looking forward to about being at Carolina? In terms of professional life, I’m very excited about the possibility of furthering my research. I think this is a setting that allows you to advance the research aspects of your career, and that’s what I was looking for in particular. The job that we have, as professors, is, number one, to be teachers, but also researchers. And the level of support that we get here in terms of research was much higher than at other comparable places.

But just in terms of being here, we’re close to Florida, and we’re close to family. Both me and my wife like that. And we also enjoy nature. We’re very outdoor people, and I think it’s a great aspect of this city, that nature is very close.

What do you hope to accomplish over the next five years? The main goal is to get out a number of publications, but I also want to create a new course that hasn’t been taught before here in the Darla Moore School of Business. I wouldn’t say it’s controversial, but it’s a unique course in the sense that I will talk about the economics of terrorism. Some of the work I do, for example I work in Afghanistan a lot, deals with violence and insurgent violence. We’ll look at channels of support for terrorism, what measures of counter-terrorism are effective, the characteristics of terrorist organizations. For example, what are the constraints, what are the decision-making processes of an individual deciding to become a suicide bomber. What motivates them, in economic terms. So those kind of topics.

What was the title of your dissertation? “Social monitoring and electoral fraud.” I actually looked at Afghanistan in the first elections after the toppling of the Taliban regime. There were obvious concerns about fraud, so the United Nations created a project that provided cell phone hotlines for individuals to call if they saw instances of electoral fraud, for example. A very simple tool that is widely available, even in Afghanistan, which is very poor.

The interesting thing here was to see if this very simple, widely available tool can have an impact in improving transparency via having this deterring effect on electoral fraud. And it’s very interesting because I find that it does help deter fraud. So actual candidates or individuals working for the candidate who may be potentially fraudulent or corrupt, they are deterred. They know they are in an area with cell phone reception, for example, and that people can actually report them if they see them.