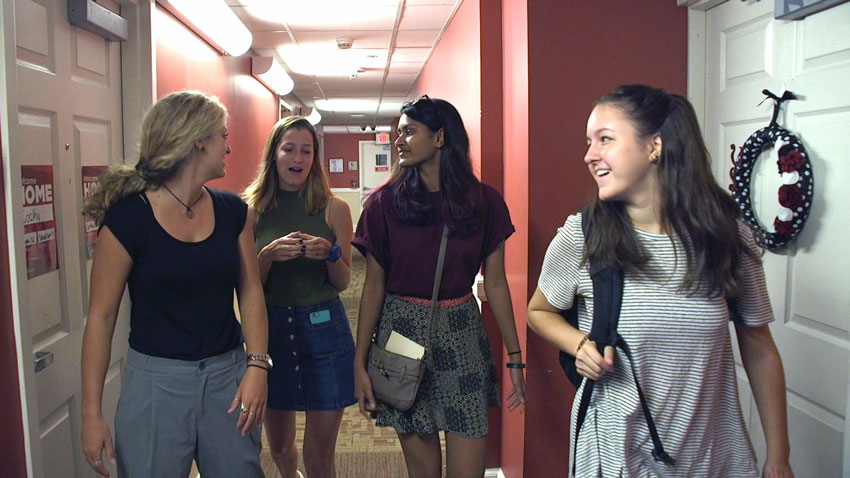 When Ashley Bodner was headed to the University of South Carolina as a freshman, she was initially disappointed when she didn’t get her first pick for a residence hall. Green Quad, where she was assigned to live, is all about exposing students to the broad ideas of sustainability, but Bodner wasn’t interested — at least not at first.

“I started out as someone who didn’t even recycle, but after a few months, I realized Green Quad was really freakin’ cool,” says Bodner, now a junior exercise science major. “Living here has led me to make lots of small changes like thinking about what businesses I want to buy from, what kinds of products I want to purchase.

“When the catalytic converter went out on my car, I insisted on getting it replaced instead of just letting it pollute.”

Marine science junior Alexa Dean says living in Green Quad has ingrained in her some of the basic principles of living sustainably that she will pass along to her children. “I want my kids to understand what will happen if we don’t take care of the world,” she says. “I want them to be environmental stewards and grow up around the ocean and not be afraid of it.”

That’s surely music to the ears of Joe Jones, the faculty principal of Green Quad who tries to help students understand the big picture of 7.4 billion people living on one planet and the responsible choices they can make to help conserve resources.

“We want to help prepare these students to be better informed citizens,” says Jones, a faculty member in environmental health sciences in the Arnold School of Public Health. “They might start out thinking sustainability is just about recycling and hugging trees, but it’s really about large-scale economics and billions of people’s lives.”

The concept of living-learning communities like Green Quad isn’t new — just about every university or college with a residential student population offers such programming. But Carolina has taken it to a much higher level. Nearly all of its residence halls have designated blocks of rooms for different student communities — business, engineering and music majors, for example — and some of those students take linked courses together. At the top level of living-learning communities are four residence halls with their own faculty principals who focus on distinctive programming.

Green Quad provides students with opportunities to start their own initiatives on sustainability and environmental issues. The Capstone Program promotes leadership opportunities for freshman and sophomore Capstone Scholars. The Carolina International House at Maxcy College puts American and international students together to develop more sophisticated global competency. Preston College, the university’s only residential college, promotes leadership, service and civic engagement. (Another principal-led, living-learning community, this one for students planning careers in health care, is planned to open in fall 2017).

Together, those four living-learning communities offer Carolina students multiple ways to learn beyond the classroom, develop a clearer vision for their professional goals and make vital connections for internships and other career opportunities.

“These living-learning communities are really the crown jewels on campus,” says David Snyder, a history faculty member and principal of the International House at Maxcy College. “We are not just dorms; we’re bonafide academic areas, and that makes all four of us dynamic.”

Go to a social gathering that involves food at Green Quad residence hall, and it will probably be a BYOP affair — Bring Your Own Plate. The idea is to eliminate non-biodegradable trash, a simple but obvious premise for a living-learning community that places a premium on sustainability.

Green Quad opened in 2004 as the university’s first LEED-certified building (Leadership in Energy and Environmental Design) and, at the time, was the largest sustainable residential complex on a university campus in the country. Green Quad’s opening ushered in a new era of leadership in sustainability. Living there is akin to living in a classroom: student residents learn how the building was designed to make use of locally sourced materials, energy-efficient lighting, water-saving devices and other features.

A speaker series brings scientists and environmental proponents to campus, and a greenhouse and large garden behind the Quad help students learn about permaculture and organic food systems. Rocky Branch Creek, which flows beside the residence hall, helps students make the connection of how local waterways, whether clean or polluted, ultimately flow into the Atlantic.

Green Quad is also home to the Learning Center for Sustainable Futures, which encourages students to explore ways to create a sustainable society.

“Most of these students won’t be environmental scientists or even work in that general field when they graduate,” says Joe Jones, Green Quad’s faculty principal. “But if we can get them to think about their individual carbon footprint and some of the basic concepts of living sustainably, imagine what that will mean over time — 500 students every year over the course of several decades.”

The International House at Maxcy College was the first thing Katie Rudnik learned about the University of South Carolina. And it was all she needed to know.

Since arriving at Carolina and living in Maxcy, the business major from Texas has studied abroad in Germany and worked as an au pair in Spain. “I wouldn’t have all of the American and international friends that I do if it weren’t for living here,” she says.

I think it helps that you have a faculty member living here with their family. Their kids ride scooters down the halls — it breaks down that barrier to realize that faculty members are real people with lives outside of the classroom.”

Built in 1937, Maxcy College is one of the older residence halls on campus, but it got a new purpose in 2012 as the International House, welcoming a mix of American and international students from Europe, Asia, South America and beyond. The community is part of Global Carolina, the university’s larger effort to internationalize the campus and encourage students to develop global competency.

That global perspective often starts with down-to-earth conversations, says David Snyder, Maxcy’s faculty principal. “They eat and socialize together, and we’ve seen time and time again a sort of magic that happens as they talk about dating habits and marriage customs, the kinds of topics that are the real fabric of a culture.

“We try to bring as much of the world as we can to Maxcy, and that benefits the international students as well as the Americans.”

Culinary and cultural events at Maxcy attract the residence hall’s own nearly 200 students plus many more from across campus. A new program, Carolina Global Scholars, helps students hone international etiquette and language skills and ultimately graduate with leadership distinction.

“An unexpressed but soon to be official goal is that by living in Maxcy you will have an intention to study abroad,” Snyder says. “We have some students who think they don’t need to study abroad because they’ve vacationed abroad. But extensive travel isn’t the same as study abroad — you have to spend significant time in a country to understand its culture, its cuisine and its people.”

Taylor Bilardello, a junior international business major from Michigan, says she always has had an interest in different cultures, but actually living with people from different countries was a learning experience.

“I thought I had an open mind coming here from high school, but I really didn’t,” she says. “It stretched me a lot living in Maxcy.”

Her friend Melanie Nelson agrees: “How cool is it to say to friends back home, ‘I’m living with people from Czech and Chile.’ If it hadn’t been for Maxcy, I don’t think I would love USC as much as I do. I would feel a little lost.”

Tori Bennett loved living in Capstone so much as a freshman Capstone Scholar that she signed on for a second year, this time as a resident mentor.

The international studies/Spanish major likes the community of high-achieving students and taking on a new personal challenge each semester — one of the hallmarks of the Capstone Scholar Program. She challenged herself to run a 5K, exercise more and watch TV shows in Spanish to improve her second language skills.

“We’ve had students submit more than 10,000 personal challenge goals since we started that aspect of the program,” says Patrick Hickey, a nursing professor and principal of Capstone Scholars since 2009. “Some students want to overcome a fear of heights so they make it their goal to do the climbing wall at the Strom [Wellness and Fitness Center]. Or they get out of their comfort zone by serving at a soup kitchen. The list goes on.”

Hickey knows about taking on personal challenges — he overcame a fear of heights as he climbed the world’s Seven Summits. And he understands the value of goal setting for students.

“Our motto is dream big and give back to the community,” Hickey says.

Capstone Scholars get plenty of inspiration to dream big from visiting speakers, service-learning trips abroad and frequent conversations with Capstone staff. A new program, called Capstone Consultations, has every one of the 1,700 Capstone Scholars sit down with an adviser each semester to discuss their goals — and map out a course of action.

“We help them build their resumes from day one,” Hickey says. “We try to help Capstone Scholars to be leaders. At the end of the day, we’re all in it for the same game: helping students succeed.”

Zalak Shah was a bit intimidated about going to a large university. The biology/pre-med senior needn’t have worried, though — she ended up in the middle of one big family at Preston College.

One of the oldest of Carolina’s living-learning communities (it began in 1995) and the university’s only residential college, Preston students eat several meals together each week at their own dining hall, hang out with 20 or so faculty associates and have their own live-in faculty principal.

“I think it helps that you have a faculty member living here with their family,” says Shah, who will have lived in Preston for four years, three as a resident mentor. “Their kids ride scooters down the halls — it breaks down that barrier to realize that faculty members are real people with lives outside of the classroom.”

Lara Lomicka Anderson, a professor of French and Preston’s newest principal, lives in a faculty apartment at the college with her husband, Andy, and two daughters, ages 8 and 10. She likes the residence hall’s family atmosphere that fosters a tight-knit feeling of community.

Alex Joen likes that Prestonites can launch their own clubs with upperclassmen helping as mentors — he’s one of them — and that the clubs become catalysts for developing organizational skills.

“And having a live-in principal gives everyone a role model to look up to,” Joen says. “The principal interacts with the staff and leverages her experience as a faculty member — kids get motivated to participate.”

The key step toward becoming an engaged leader, says Anderson, is getting involved and not thinking so much about being a “leader.”

“Leaders come in all shapes and sizes, and we encourage students who don’t think they’re cut out to be leaders to focus on others, not on themselves,” Anderson says. “I want to see everyone at Preston involved in some way, whether it’s serving in hall government or working at Transitions, a homeless shelter.

“I want them to make an impact and be transformed in the process — to become someone different than who they were when they arrived.”