The grueling fitness test started at 8 p.m., didn’t end until the next morning and the temperature never rose above freezing. But after that 12-hour ordeal, called the GORUCK challenge, Daniel Keenen made up his mind to become an Army ROTC cadet. 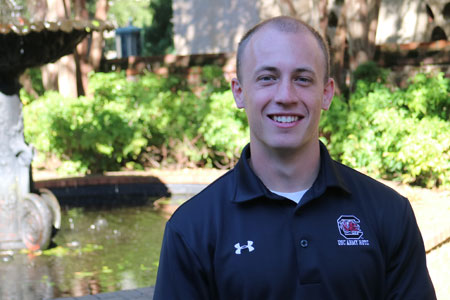 Daniel Keenen didn't come to Carolina with ROTC in mind. But he ended up becoming the No. 2 cadet in the nation.

That was in between the first and second semester of his freshman year. Now a senior geography/Russian major at Carolina, Keenen has tackled the rigors of college and ROTC service with the same gusto as that all-nighter fitness challenge — he has a 4.0 GPA and he was recently ranked the No. 2 ROTC cadet among more than 5,000 cadets in the country. Not bad for a guy who wasn't even sure he wanted to be in ROTC when he started college.

The Army ranks its cadets based on several variables, including academic performance, involvement in extracurricular activities, leadership and physical fitness. Along with his perfect GPA, Keenen has been president of both the ROTC Club and the Russian Club and nailed a perfect score on his physical fitness test.

Keenen knew his scores probably placed him in the top 10 among cadets, but even he was surprised to learn he had made No. 2. Being second best in this crowd is an accomplishment to be proud of.

After graduation in May, Keenen plans to join the U.S. Army Reserve and hopes to work in military intelligence. He’s also planning to start seminary in the fall, possibly at Brite Divinity School in Fort Worth, Texas, with the goal of working in pastoral care and counseling.

“What attracted me to be an Army officer in the first place is the opportunity to be a mentor and a guide,” he says. “That’s what I want to be for others.”