The last time the Chicago Cubs won a World Series, the University of South Carolina was emerging from the challenging years that followed the Civil War and Reconstruction.

Only two years prior was South Carolina College renamed a university. The first new building in nearly half a century was underway with the construction of Davis College, and newly elected university President Samuel Chilis Mitchell was rallying the people of South Carolina in support of education, better roads and public health. 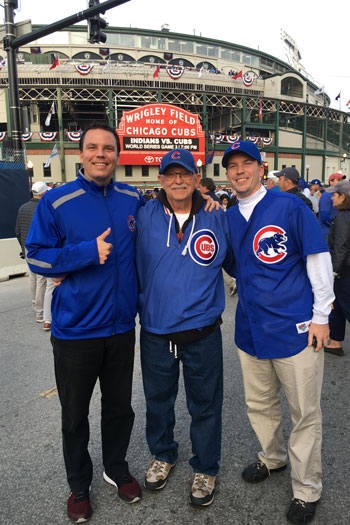 Cubs fan Andrew Kitick attended game 3 of the World Series with his father and brother.

Perhaps President Mitchell, who earned his doctorate from the University of Chicago, was a Cubs fan. We don’t know. However, it’s probably a safe bet the trained historian would have appreciated this year’s historic World Series matchup. He also probably would have liked hearing stories from faculty, staff and students were able to attend a game, witness history and chant Go, Cubs Go! or Let’s go Tribe!

We caught up with three Carolinians, each a loyal Cubs or Indians fan, who attended a game in this year’s World Series and shared their personal accounts.

As I grew up a Cubs fan, our family would go to games together, cheer, clap, keep score, eat a Chicago-style hot dog and dream of the day that the Cubs might make it back to a World Series. To see that dream come true, was simply incredible.

Attending Game 3 of the 2016 World Series was an emotional experience and something I will treasure for the rest of my life. The electricity inside and outside the ‘Friendly Confines’ was at a level I had never seen. Happiness, relief, excitement and nervousness of the entire nation of Cubs fans was all mixed together. I was happy for every Cub fan in the world.

As I shared with my friends in a Facebook post before the game, I was happy most, though, for my father. When I was 10 in 1989, my father pitched an inning at the Randy Hundley Fantasy Baseball Camp on the mound at Wrigley Field. As part of the camp, they made baseball cards with facts on each person. On the back of it, he stated a simple goal — to take his two sons to a Cubs World Series game at Wrigley Field. Fast forward to Oct. 28, 2016 — he was able to do that.” 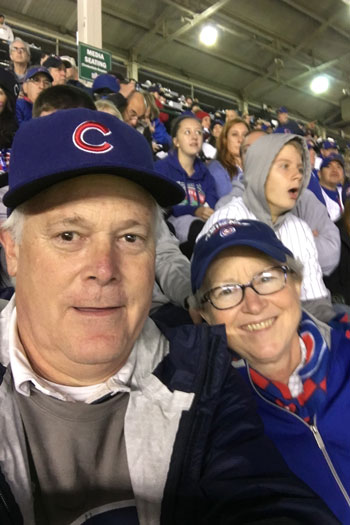 Cubs fan Dean Rob Wilcox and his wife at game 4 of the World Series.

“I am a lifelong baseball fan, but unlike many who were at Wrigley Field for Game 4, I am not a long-suffering Cubs fan.

While waiting for the Braves to resurrect their fortunes, my die-hard loyalties changed several years ago when the Cubbies became my youngest son’s employer. Being at Wrigley Field anytime of the season is a form of baseball pilgrimage, but no fan could turn down the chance to attend the first Cubs’ World Series in 71 years.

Thousands of Chicagoans without tickets had come to Wrigleyville, just to share in a long-awaited World Series. My wife, Lisa, (an Indians fan in childhood, but now a loyal Cubs fan) and I had gone to Chicago two weeks earlier for Game 1 of the League Championship Series, which the Cubs had won on a pinch-hit grand slam. Old Wrigley literally vibrated that night.

At the start of Game 4 against Cleveland, the evening promised even more raucous excitement. Decades of disappointment had been transformed into a few nights of celebration and expectation. Unfortunately, Cleveland took control of the game early with a chilly breeze blowing in, and the crowd quieted a bit. The magic of the moment, however, never dissipated.” 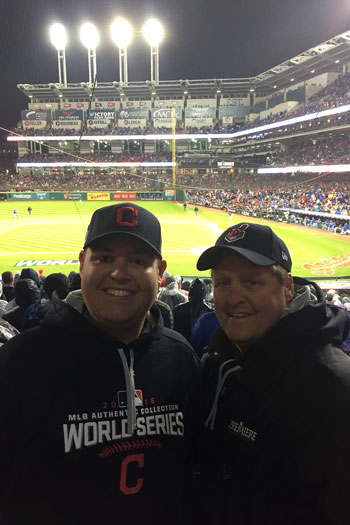 Indians fan and graduate student Jonathan potter at game 2 of the World Series with his father.

“There is nothing quite like being from The Land. Dating back several generations, the Potter family has been diehard Cleveland sports faithful. Up until 2016, even my father had not seen a major sports championship.

The Indians are such an important part of our lives that we took 40 of our closest family and friends to New York City during the first weekend in August this year to watch the Tribe compete in the Bronx against the perennial power New York Yankees for my dad’s 50th birthday. As soon as the Indians got the final out against the Blue Jays in the playoffs, my flights were booked and the World Series tickets that we had on hold were now a reality.

Being a student in South Carolina posed a logistical issue, but as we say in Cleveland, ‘Nothing is given, everything is earned.’ After an important presentation the morning of Game 2 that I could not miss, I bolted for the airport in all of my Indians gear, ready to cheer on my team. I could feel the energy building as the masses were walking toward the stadium … it was our time. I found myself thinking many times throughout the night, ‘Wow, I am at the most significant World Series of all time, in my favorite stadium, and the team that I love has the chance to win it. Only a handful of people in the world can say that!’

Game 2 did not go our way, but I wouldn’t trade that experience for the world. It is something that is etched into my mind for the rest of my life. Sharing that moment and so many more with my father and my uncle was incredibly special. We love our Indians and we love The Land! Go Tribe!”