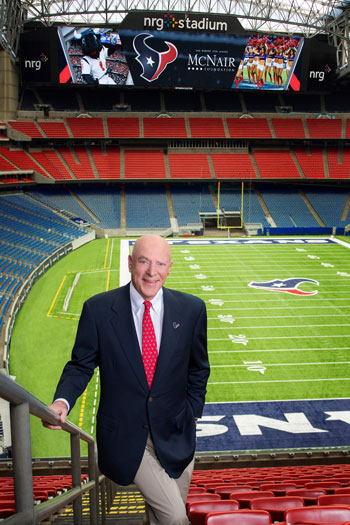 University of South Carolina alumnus Bob McNair wears many hats: investor, philanthropist, owner and CEO of the NFL’s Houston Texans. Lately, McNair has been pondering the future of America’s college graduates, and that has led him to take on yet another role— champion of free market ideas within academia.

The Texas billionaire with middle class roots in rural North Carolina says while he has experienced the "American Dream" firsthand, he’s increasingly worried too many young people — even those with college degrees — won’t have the same chance. He says many colleges are good at training students to do specific jobs,but that may no longer be enough.

“The reason there’s so many people who are frustrated and feel that the future is not bright is because the economy has not been growing at an adequate rate. There’s simply not enough growth to create opportunities for young people coming into the marketplace, so you wind up with a lot of educated people who are unemployed or underemployed.”

His solution to help turn that around? Jump-start the nation’s economy by increasing the pipeline of dynamic thinkers educated in the philosophy and core values of the free-market system.

McNair will visit Carolina on Thursday (Nov. 10) to announce the establishment of the $8 million McNair Institute for Entrepreneurism and Free Enterprise. It’s one of a handful of similar centers funded by the Robert and Janice McNair Foundation at colleges and universities across the country. The goal of the institute at USC is two-fold: encourage active participation in entrepreneurial endeavors and help students gain a deeper understanding of the principles that underpin the American economy.

During his visit on Thursday, he will sit down with President Harris Pastides for a wideranging discussion about the new institute and his life in the business and sports worlds.

McNair, who graduated from USC with a psychology degree in 1958, has had a long and varied business career. He grew up in Forest City, N.C., where his father was a sales manager at the Sunshine Biscuit Co. and his mother was a homemaker. While at Carolina, he began selling insurance and later moved to Texas to start an auto leasing company. It was his foray into the energy field that led to his greatest career success. He eventually founded Cogen Technologies, one of the largest privately held energy companies in the world. He sold Cogen prior to founding the Houston Texans in 1999 and he maintains ownership of a private investment company.

He and his wife, Janice, have supported many higher education projects through the years. They have funded scholarship programs at various institutions throughout the country as well as medical research and faculty recruitment efforts in Texas. At Carolina, an initial $20 million gift in 1998 created the McNair Scholars program. Since its inception that program has recruited 350 of the nation’s best high school graduates to the university.

McNair says that today even top students can’t afford to take future prosperity for granted, and can benefit greatly from understanding the interplay between innovation, free enterprise and the current economic climate.

“I believe that many students at South Carolina probably can enjoy greater economic opportunity and financial success by being entrepreneurs rather than working for giant corporations,” he says. “But you have to understand how the system works. It’s a little like football — if you’re going out and playing in a football game but don’t understand the rules of the game, you probably don’t have much of a chance of winning.”

USC alumnus Bob McNair will sit down for a conversation with President Harris Pastides on Thursday (Nov. 10) at the Booker T. Washington auditorium. The event begins at 5 p.m. and is open to all faculty, staff and students.