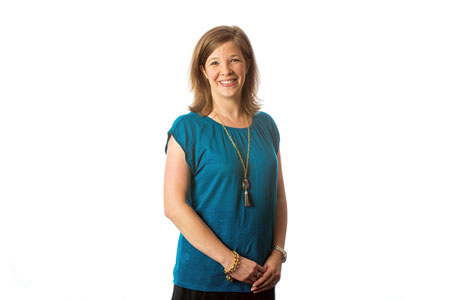 "Students say I have an ability to explain things in an easy-to-understand fashion. Sometimes, I might explain it six different ways so that everyone understands." — Brie Dunn, associate professor, S.C. College of Pharmacy and 2016 Garnet Apple Teaching Award winner

Brie Dunn earned a chemistry degree as an undergrad and soon found herself wearing a hard hat and steel-toed shoes in an industrial lab. After tiring of that environment, she returned to school to earn a Pharm.D. degree.

Through all of those changes, she never thought much about teaching, but that’s exactly what she found herself doing after joining the clinical pharmacy faculty at Carolina six years ago. It was unfamiliar terrain, but she quickly sought out resources such as the Center for Teaching Excellence and other colleagues to gain a better understanding of educational philosophy.

“Students say I have an ability to explain things in an easy-to-understand fashion. Sometimes, I might explain it six different ways so that everyone understands,” she says.

Dunn’s teaching prowess has led to several recognitions, including the 2014 American Council of Clinical Pharmacists’ New Educator of the Year, the 2015 USC Provost’s Clinical Teacher of the Year and the 2016 awarding of the inaugural Garnet Apple Teaching Award.

Dunn’s love for technology led her to use educational technology tools that present students with case scenarios, testing their pharmaceutical knowledge and decision-making skills. In one scenario, the students are presented with an avatar for “Miss Laura,” an emergency room patient with a severe infection. Their treatment decisions take them through a series of branching algorithms that ultimately determine Miss Laura’s fate.

“I also create games for them so they can challenge themselves and test their knowledge. I like to engage them in active learning,” she adds.

Dunn divides her working time between the pharmacy college and Palmetto Health Richland, where she works as a clinical pharmacist in cardiology. Two different pharmacy students accompany her each month — providing yet another teaching opportunity.

“I’m very glad things turned out the way they did,” she says. “The mentorship and guidance throughout the university have been fantastic. The openness of the university to new modalities and trying new things is very refreshing.”