Why the universe is accelerating

Nearly 90 years ago, astronomer Edwin Hubble discovered that the universe is expanding. Now we know, thanks to research by Adam Riess and other scientists, that this cosmic expansion is speeding up. 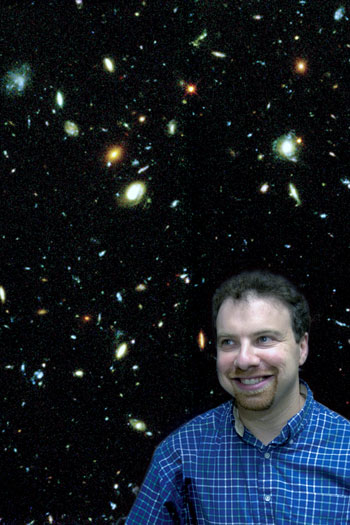 Adam Riess, Nobel laureate astronomer, will explain the phenomenon of a faster-expanding universe in a public lecture on Jan. 17.

Riess, an astrophysicst at Johns Hopkins University and a Nobel laureate and member of the National Academy of Sciences, will explain the phenomenon of a faster-expanding universe in a public lecture at Carolina. The presentation, “Supernovae and the Discovery of the Accelerating Universe,” is geared for a lay audience and sponsored by the department of physics and astronomy and the College of Arts and Sciences.

“I would say if the subject of the universe and what it’s made of is interesting to you, you will definitely understand this lecture. There are no prerequisites to this one,” says Riess, who searched for distant supernovae with UofSC astrophysicist Steven Rodney when Rodney was a postdoctoral Hubble Fellow at Johns Hopkins several years ago. More recently, Rodney has been leading a new program to find distant supernovae with the Hubble Space Telescope.

The acceleration of an expanding universe is still a bit confusing, Riess says, but it points to dark energy, which makes up 70 percent of the mass energy budget of the universe.

“The Earth is two-thirds water, and that’s about what the percentage of dark energy is in the universe,” Reiss says. “Now, imagine if we didn’t know what water is — that’s analagous to where we are now in our understanding of the composition of the universe.”

While an expanding universe has no effect on daily life on Earth, the long-term implications — think billions of years — point to dire consequences.

“We’ve calculated that this accelerated expansion of the universe started 5 billion years ago,” Riess says. “We lack a deeper understanding of dark energy, but if the acceleration continues as it appears, light from distant galaxides eventually won’t be able to reach us. The horizon, as it exists now, will be limited to just the nearby galaxies.

“More distant objects will become invisible. More importantly, dark energy could be growing in strength, and that could result in the Big Rip, shredding the universe apart, including Earth.”

Mysterious dark energy? A shredded universe? Sounds like the plotline for a sci-fi movie — or the premise of an interesting public lecture.