Say yes to Carolina Day at the Statehouse

Dr. Caughman Taylor grew up in small rural towns in South Carolina where there were no doctors to care for families’ basic needs. He watched his parents, both educators, work to improve the lives of children and communities through education.

Growing up in Lake View in Dillon County, he began to recognize those needs for himself. Not surprising, he became a doctor and an educator, today serving as chairman of clinical pediatrics at the University of South Carolina School of Medicine, where he earned his medical degree in 1983.

“I grew up wanting to be a pediatrician, taking care of young children and young parents. It was when I stepped outside my office, my job, and got involved in the schools and in the community around health needs that I realized that I could have an even greater impact,” Taylor says. “I said yes to getting involved. It made me more empathetic. It made me a better doctor.”

Saying yes to involvement and advocacy has led Taylor to do mission work in El Salvador, to take leadership roles with the boards for the S.C. Alliance for Children, S.C. Safe Kids and Palmetto Health Children’s Hospital and serving as president of SC’s chapter of the American Academy of Pediatrics. 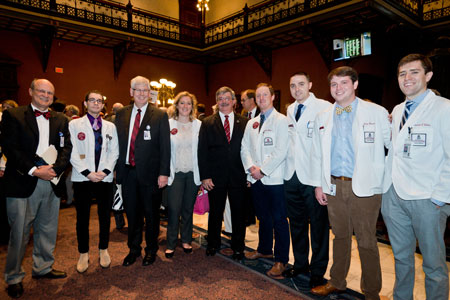 Dr. Caughman Taylor, left, believes in the power and purpose of advocacy. He invites alumni, faculty and staff to join him at Carolina Day at the Statehouse Jan. 25 in support of higher education.

He says advocacy in medicine, including patient advocacy and service, mission and free-clinic work, has taken on a greater role in the past 30 years. The awareness of how outside forces, such as legislation, regulation and policy, can impact medicine and education also has grown.

“Education, socio-economic status and other social determinants have as much an impact on lives as the drugs I prescribe. I have to be involved in trying to impact those determinants. People with more education in general are healthier, have less risk for certain diseases, earn better jobs and have a better quality of life,” Taylor says.

That’s the message and passion he plans to share with legislators on Wednesday (Jan. 25) at Carolina Day at the Statehouse. It will be the third time he has joined alumni, faculty and students at the annual event to advocate for the support of higher education and the vital role it plays in the economic health of the state and lives of its residents.

He invites fellow faculty and staff — including the 3,000 who are Gamecock alumni — to join him at Carolina Day.

“It’s fun! I encourage everyone to do it. Legislators want to hear human stories and how what we do affects people in our state,” says Taylor. “They respond to our stories. Advocacy is about being part of a solution and sharing your ideas, passions and dreams. As faculty and staff members that means advocating for future learners and doing our mission better.”

Taylor calls the Statehouse a learning environment and says that Carolina Day and advocacy is also about listening and learning about other viewpoints. While My Carolina Alumni Association will prepare participants with key facts and messages, Taylor says advocates should be ready to share their personal stories and follow up with legislators through emails or notes.

“Stay engaged and be responsive if and when a legislator reaches out to you,” he says.