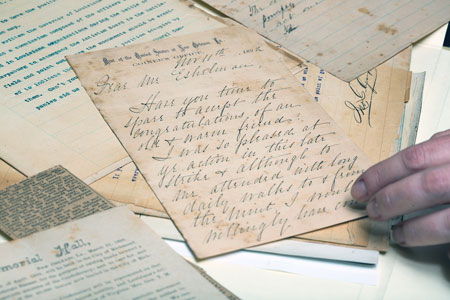 Ask Mindy Castles how many times she’s been to Gettysburg National Military Park, and she’ll probably just smile and roll her eyes. Her late husband, Jack, was an amateur historian and collector who focused on the Civil War, and the Gettysburg battlefield drew him like a moth to a candle.

“Jack’s mother was born in Vermont — his grandfather and great-grandfather were governors of that state — and his father was from New Orleans, so he had a keen interest in the northern and southern experience,” Castles says.

In a career that spanned decades, Jack Castles, a Yale graduate, was a successful trial lawyer and, later, a lawyer for the Securities Exchange Commission. When he retired and the Castles moved from Connecticut to Callawassie Island, near Beaufort, S.C., his interest in Civil War history was further piqued.

Along the way he amassed an interesting collection of Civil War documents, including a a set of signed orders from Confederate Gen. Robert E. Lee and the papers and scrapbook of Benjamin Franklin Eschelman, commander of the Washington Artillery. That collection, along with an eclectic mix of other historical documents, is now housed at USC Beaufort’s Hilton Head Gateway campus library.

“These documents represent a fascinating glimpse into the experiences of the men who fought America’s most important war — their motivations, their hopes and fears, and later, their memories,” says Brent Morris, an assistant professor of history at USC Beaufort and director of the NEH teachers’ institute, America’s Reconstruction: The Untold Story. “These firsthand accounts offer a unique perspective that often gets lost in the history books a century or more removed from historical events.”

Why did the couple donate such a valuable collection to a university campus from which neither had graduated? Mindy Castles, an alumna of Sweet Briar College, was a professional interior designer who assisted with the refurbishment of the historic Beaufort College Building in downtown Beaufort. She helped procure period furnishings for the building, which was constructed in 1852, and that became the cornerstone of the Castles’ connection with USC Beaufort. “Later, Jack said he felt that his collections belonged there, that this was our home and USC Beaufort was our neighbor,” she says.

But the Castles’ generosity didn’t stop there. They donated much of their personal library to the university, as well as a valuable Frederic Remington painting. The latter was sold, and the proceeds, along with a supplemental gift from the Castles, established the John W. Castles 3d Endowed Scholarship for USC Beaufort students.